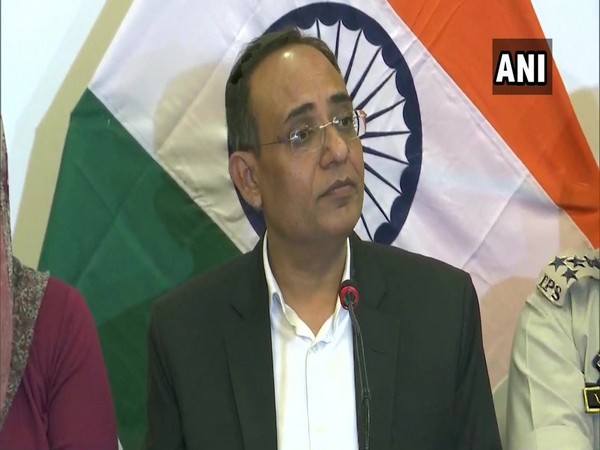 Srinagar (Jammu and Kashmir) [India], Sept 2 (ANI): Jammu and Kashmir's Principal Secretary Rohit Kansal on Monday said that around 93 per cent of J&K and Ladakh are free from any prohibitory orders now.
"In totality, we have 93 per cent of Jammu and Kashmir, and Ladakh free from any prohibitory orders today," Kansal said while addressing a press conference here.
Talking about law and order in Kashmir valley, he said: "Out of 111 police stations in the Valley, day time restrictions have fully been lifted from 92 police stations, up from 81 last week. This makes 90 per cent of the Valley free from day time restriction of any kind."
Jammu and Kashmir and Ladakh will continue to be free from such restrictions, he added. In Jammu and Ladakh, landlines as well as mobile phones are fully functional.
"On the communication front, in our latest decision, we decided to open 29 more exchanges, making the number of functional exchanges to 76 out of a total of 95. Over 26,000 landlines are functional in the Valley," he said.
"This is evident from the fact that the Deputy Commissioner (DC) office in Srinagar, which used to see 2,500 calls being made from its facility has seen the number of calls being made from its facility falling by over 85 per cent," he said.
Talking about the return of normalcy after the abrogation of Article 370 from the region, Kansal said: "We have decided to open primary, middle and high schools. Over 4,000 schools are now functional with good staff attendance. Attendance of children continues to improve."
He said the public transports are returning to the road. "Inter-district public transport in the Valley particularly for the north, south, as well as Jammu and Kargil particularly through LMVs, is now available. The national highway continues to be normal," added Kansal.
"The movement of fruit trucks on the highways is steadily increasing. Up to 300 trucks are plying daily. Over 1.5 lakh metric tonnes of fruits have been sent to various sale points outside the Valley. All essential supplies continue to be normal in the Valley," he said.
The Principal Secretary further said that there have been some comment about medical facility and hospitals in 10 districts of the Valley.
"I must reiterate that all medical facilities and hospitals are functioning normally. The district hospitals have reported around nearly 2.5 lakh OPDs, 20,000 IPDs and 200 major surgeries since August 5. Besides, 2,000 deliveries both caesarian and normal were performed," he said.(ANI)