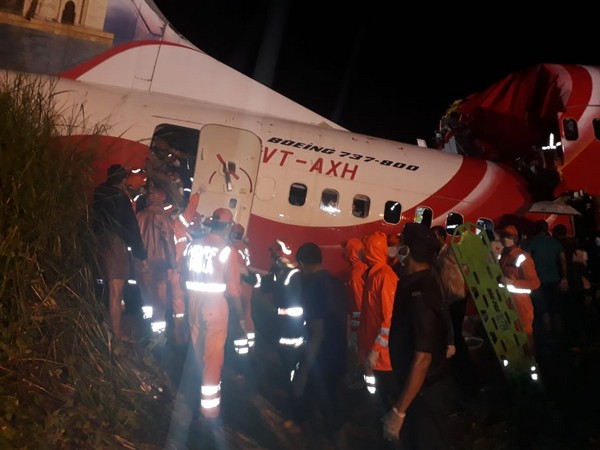 Dubai [UAE], Aug 8 (ANI): The Consulate of India in Dubai has expressed grief and conveyed deepest condolences to the bereaved families of the victims of the plane crash incident which took place at Kozhikode in Kerala on Friday evening.
The Consulate General of India (CGI), Dubai issued a helpline number for Air India Dubai -- +97142079444.
"As per the latest information from state authorities, search and rescue operation is over and all injured have been shifted to various hospitals like MIMS, Aster etc and in Mallapuram. Air India Dubai helpline +97142079444. CGI (Consulate General of India) Dubai expresses its deep condolences for deceased passengers," the Indian consulate in Dubai said in a tweet.
The CGI further informed about the helpline numbers issued by the Mallapuram district administration -- 8330052468 and 04832719493.
At least 16 people have died when a plane with 190 people on board coming from Dubai met with an accident at Karipur airport in Kozhikode on Friday evening, as per the Directorate General of Civil Aviation (DGCA).
"Death toll in the Air India Express flight crash landing incident at Kozhikode rises to 16," the DGCA said in a statement.
Air India Express Dubai-Kozhikode IX-1344 flight, carrying 190 people on board from Dubai under the Vande Bharat Mission, skidded off the runway at Karipur Airport in Kozhikode at 7:41 pm on Friday. (ANI)