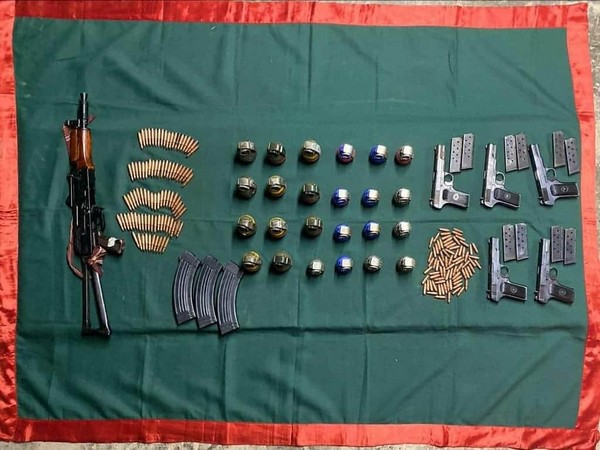 Baramulla (Jammu and Kashmir) [India], July 24 (ANI): One AK-47, five Chinese pistols with magazines, 24 grenades and other warlike stores were recovered during a search operation launched on Wednesday along the Line of Control (LoC) in Rampur Sector of Baramulla district, the Indian Army said.
The search operation was launched in Hathlanga, Rampur Sector after security forces received input regarding likely weapon drop along the Line of Control ahead of Anti Infiltration Obstacle System (AIOS).
"On 22 July 2020 late evening, input was received regarding likely weapon drop along the Line of Control ahead of AIOS. On this basis, a search operation was launched along the Line of Control in Hathlanga, Rampur Sector, Baramulla district," the Army said.
"During the search operation, a weapon cache was discovered. Recoveries include one AK-47 with magazines, 5 Chinese pistols with magazines, 24 grenades and other warlike stores," it said.
ANI had earlier reported that security forces at India-Pakistan border have been put on high alert after an intelligence input revealed that terrorists are trying to sneak into Jammu and Kashmir to carry out 'action'.
According to the input, "There is likely presence of armed terrorists in Bhimber Gali and Naushera sectors with an intention to infiltrate to carry out BAT (Border Action Team) action."
Forces suspect that the BAT of Pakistan Army is facilitating terrorists to carry out action soon. There have been movements of terrorists towards the Indian side.
"Patrolling has been enhanced and there will be extra deployments during the night. Any misadventures of Pakistan will be responded effectively," a senior BSF official had said.
"During this season, BAT facilitates terrorists to infiltrate into India. After getting them trained at various known locations, BAT and other Pakistani agencies send them near the border and when they fail in multiple attempts, they plan action with these terrorists to facilitate them," a senior government official said.
Pakistan's BAT consists of its army commandos and terrorists belonging to various terror outfits like Jaish-e-Mohammad, Lashkar-e-Tayyaba etc. BAT has started targeting civilians as well.
Earlier, DIG Baramulla M Suleman said that arms and ammunition recovered from the three Lashkar-e-Taiba (LeT) terrorists killed in Sopore encounter on the intervening night of July 11-July 12 shows that "they were planning a big attack".
On July 19, Commander of the Army's 12-Sector, Ajay Katoch said that the presence of Pakistani terrorists was seen in the last five to six operations which have taken place since June in Jammu and Kashmir. (ANI)