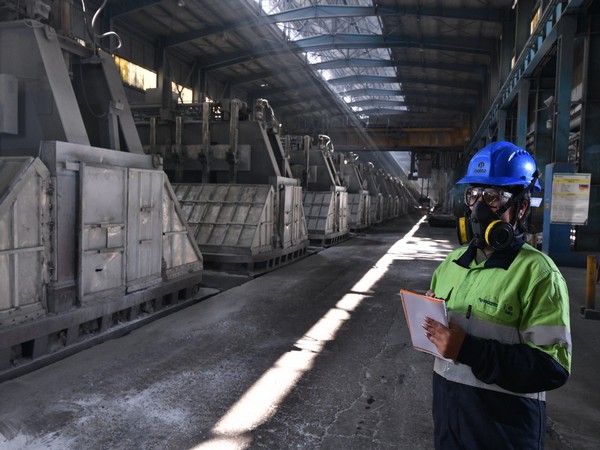 Balconagar Korba (Chhattisgarh) [India], June 11 (ANI/PNN): Bharat Aluminium Company (BALCO), India's iconic aluminium producer is a strong proponent of leveraging next-generation technology to make its manufacturing process sustainable and reducing carbon footprint.
BALCO has reduced its power consumption in its 'potline 1' at its smelter in Chhattisgarh to 12,862 KWH/MT which is at par with global standards.
This potline has hence, the best performance amongst potlines in India and the Gulf countries in terms of specific power consumption and has thus reduced its carbon footprint significantly. A smelter is a plant where aluminium is produced through the process of smelting, which involves extracting it from its oxide, alumina.
A potline is a long building, or collection of buildings, which contain a series of "pots", or large. electrolytic cells, in which aluminium is made. The company has achieved this benchmark by deploying a smart combination of high-end technology and indigenous innovations.
Speaking on BALCO's carbon footprint reduction in its manufacturing process, Abhijit Pati, CEO and Director, BALCO, said, "We are committed to sustainable development and across all our areas of operations using leading-edge technology, and judicious utilization of resources. BALCO has been one of the early adopters in India to explore the field of smart technologies for heightened operational efficiencies. These investments and skills further bolster the culture of safety and productivity that we have meticulously fostered across the organization. We are conscious of our responsibility towards building a stronger and sustainable tomorrow and, therefore, are actively exploring innovations that help reduce carbon footprint as early as possible in the creation process. We are ensuring a future-ready organization for a self-reliant India."
The company has integrated smart technologies and design modifications in its potlines progressively to reduce its specific power consumption by using a graphitized pot with thermal modelling and other digital interventions. The company relentlessly drives innovation and continuous improvement in its smelting technology.
BALCO's specific energy consumption has been one of the lowest in the aluminium industries across the country. BALCO has also brought down its specific water consumption today by 170% from its previous specific water consumption levels, which is also one of the lowest amongst its peers. These figures are a testimony to BALCO's spirited endeavours towards environment and energy conservation which contribute to a greener and better planet.
BALCO has been the recipient of various awards and accolades for its environmental conservation efforts. For the year 2020, BALCO has won the 'CII Energy Efficiency Award', 'Golden Peacock Sustainability Award' and 'CII HSE Excellence Award, Chhattisgarh'.
BALCO has also achieved the 'International Green Apple Award', 'CII Energy Excellence Award', 'Sustainable Business of the year Award', 'National Award for Excellence in Energy Management' and 'Energy & Environment Global Environment Award' in recent years.
This story is provided by PNN. ANI will not be responsible in any way for the content of this article. (ANI/PNN)