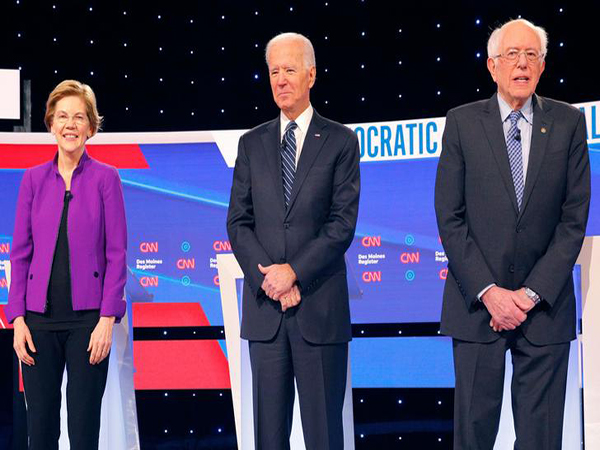 Iowa (USA) Jan 15: Former Vice President Joe Biden and Senator Bernie Sanders battled over the decision to authorize military action in Iraq, pitting two leading contenders against one another minutes into a pivotal debate in Des Moines on Thursday night just weeks before the Iowa caucuses.
Sanders has hammered Biden for voting to authorize military action in 2002 and describing it as "the worst foreign policy blunder in U.S. history."
"Joe and I listened to what Cheney and Bush and Rumsfeld said, and I thought they were lying," Sanders said. "I did what I could to end that war, but Joe saw it differently."
Biden has acknowledged that voting for the Iraq War but argued that the Bush administration lied about its intent and said that when he became former President Obama's top deputy, he did what he could to bring troops home quickly.
"It was a mistake and I acknowledged that, but the man who argued against the war, Barack Obama, picked me to be vice president . and turned to me and asked me to end the war," Biden said.
"It was a mistaken vote but my record on everything else we've done, I'll compare it to anyone else on this stage."
Foreign policy is in the spotlight amid heightened tensions with Iran.
Sanders, who leads in the most recent Des Moines Register survey of Iowa, has made the case that he's been the party's leading voice on withdrawing the U.S. from foreign conflicts.
Biden's vote for authorization has been a drag on his campaign, but he has made the case that he has the most foreign policy experience in the field and established relationships with world leaders.
Source: The Hill