Bolton says he won't be voting for Trump or Biden 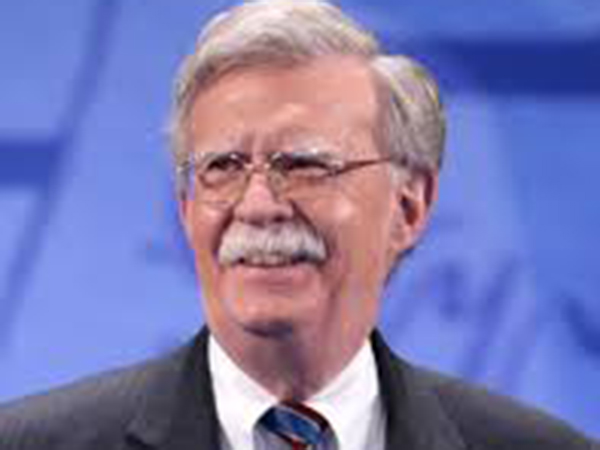 Washington, D.C. (USA) June 22: Former national security adviser John Bolton said he will not be voting for his former boss President Donald Trump or the presumptive Democratic nominee Joe Biden in this year's election.
"I don't think he's fit for office," Bolton said of Trump in an interview with ABC News that aired Sunday. "I don't think he has the competence to carry out the job. I don't think he's a conservative Republican."
"I'm not gonna vote for him in November. Certainly not gonna vote for Joe Biden either," he added.
Instead, Bolton told ABC he will "figure out a conservative Republican to write in."
After The Daily Telegraph reported earlier Sunday evening that Bolton, a lifelong Republican, said he would vote for the former vice president over Trump, Bolton's spokeswoman told CNN that the newspaper was wrong.
"This statement is incorrect. The Ambassador never said he planned to vote for Joe Biden," Sarah Tinsley, Bolton's spokeswoman, told CNN.
Tinsley added that the Telegraph has been asked for a correction.
"He will not be voting for Biden or Trump," she told CNN.
Though the Telegraph reported in its article that Bolton would be voting for the former vice president, they did not quote him saying he would.
"In 2016 I voted for Trump over Hillary Clinton," Bolton told the Telegraph in an interview published Sunday. "Now, having seen this president up close, I cannot do this again. My concern is for the country, and he does not represent the Republican cause that I want to back."
In the interview to promote his new book "The Room Where It Happened" out Tuesday, the Telegraph reported that Bolton insisted that voting for Biden was not betraying his GOP roots because he said he didn't believe Trump represented the Republican Party.
CNN reached out to the Biden campaign for comment.
No former Trump national security official who has publicly criticized the President has gone as far as to endorse Biden.
That includes Trump's former chief of staff John Kelly, former Secretary of State Rex Tillerson, former national security adviser H.R. McMaster and former Defense Secretary James Mattis, who in a scathing statement castigated Trump as "the first president in my lifetime who does not try to unite the American people."
Earlier Sunday, the Trump campaign reacted to the initial news that Bolton said he wouldn't back the President for a second term.
"John Bolton has shown he's willing to lie and to disclose classified information to sell books. As even former President George W. Bush said about him, he has no credibility," Tim Murtaugh, the communications director for Trump's campaign, said in a statement provided to CNN.
Bolton was Trump's national security adviser from March 2018 to September 2019, after the two were at odds over US foreign policy including relations to Iran, Venezuela and Afghanistan. Bolton had previously held roles in the Reagan administration, and was the
Bolton's book has been subject to a months-long legal battle between him and the Trump administration, which in a last ditch attempt last week asked a judge for emergency help to stop the book's publication.
The White House had argued that Bolton has breached non-disclosure agreements and risks national security by exposing classified information.
A federal judge on Saturday blocked the Trump administration's attempt to prevent the publication of Bolton's book -- but left open the possibility that Bolton could face criminal charges or be forced to hand over profits related to the book.
On Sunday, White House trade adviser Peter Navarro told CNN's Jake Tapper on "State of the Union" that his former colleague could face jail time over his disclosures.
In the book, Bolton makes stunning accusations against his former boss, claiming that Trump personally asked Chinese leader Xi Jinping to help him win reelection, and that he expressed support for China's concentration camps for its Uyghur Muslim population, among other embarrassing foreign relations conversations.
Trump has called Bolton's book "pure fiction" and "a compilation of lies and made up stories, all intended to make me look bad."
UPDATE: This headline and story have been updated to reflect that John Bolton said he won't vote for Joe Biden or Donald Trump in the 2020 presidential election, according to an interview with ABC News and his spokeswoman.
Source: CNN