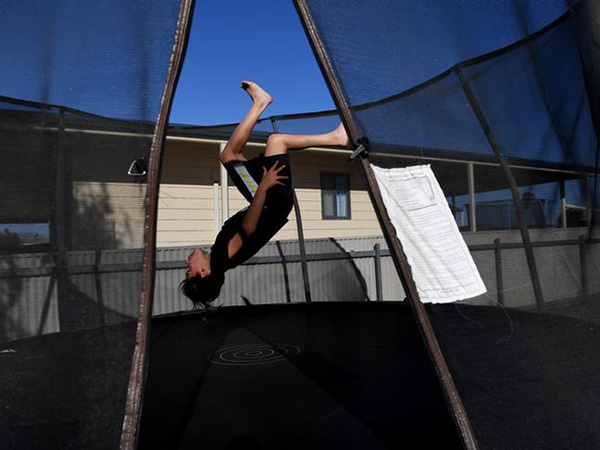 Ottawa (Canada) Dec 01: Canada has qualified a spot in women's individual trampoline at the Tokyo 2020 Olympic Games.
Rosie MacLennan of King City, Ont., and Samantha Smith of Vancouver finished fourth and eighth respectively in the semifinals of that event on Saturday at the trampoline world championships, advancing them both to the finals, and qualifying the Olympic spot.
Smith went on later in the day to capture a bronze medal in synchronized trampoline with Rachel Tam of Toronto.
Canada could also secure a second spot through points gained from the World Cup series which wraps up next spring.
"Today was a little stressful, but I just came in trying to do the best routine I could do," MacLennan, who is still coming back from a broken ankle injury from earlier in the year, said. "I was a little bit shaky again, I think I was little bit nervous, and a lot of people were feeling the pressure out there, but I was able to pull out 10 skills, and managed to sneak into the final with Sam Smith. It's awesome to have two athletes in the finals for Canada and we're really excited."
Smith had to regroup quickly to compete in the women's synchronized trampoline finals. She and Tam were the third team up and scored 48.420 to capture the bronze medal. The Japanese team won gold with a score of 49.590, while Russia captured silver with a score of 48.570.
"This was a really exciting day," Smith said. "The semifinals got off to a shaky start, I actually crashed in my pre-bounces and so I got a little bit of a time penalty, but I'm really proud of my routines, and I've shown that I've been really consistent over the last three optionals in this meet, so I'm really happy with them."
Keegan Soehn of Red Deer, Alta., was the lone competitor in the men's trampoline semi-finals, and he finished the day ranked 21st after scoring 56.700. Canada can still qualify a men's spot for Tokyo through the World Cup series.
In the men's double mini-trampoline (DMT) final, Mario Bruno of Kamloops, B.C., narrowly missed the podium, finishing fourth with a score of 72.400.
Action continues from Tokyo on Saturday at 1 a.m. ET, which you can watch live on CBCSports.ca
Coverage continues through Sunday.
Source: CBC News