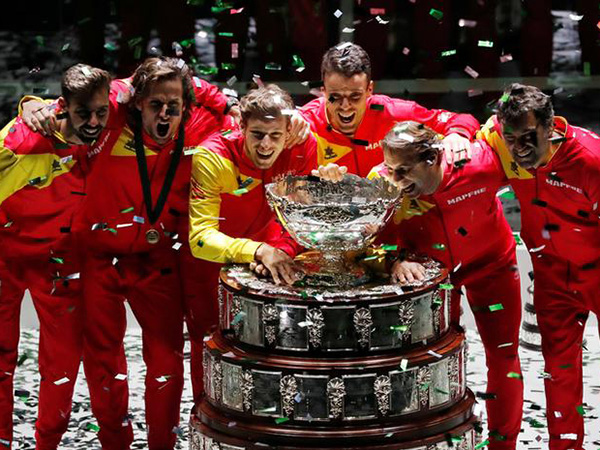 Ottawa (Canada) Nov 25: World No. 1 Rafael Nadal defeated Denis Shapovalov 6-3, 7-6 (7) on Sunday to give Spain its sixth Davis Cup title and deny Canada its first.
Shapovalov of Richmond Hill, Ont., fended off a pair of championship points in the second-set tiebreak before Nadal could seal the win.
The No. 15-ranked Shapovalov, Canada's top singles player, was playing a must-win match after Montreal's Felix Auger-Aliassime dropped the opening singles rubber in straight sets to Roberto Bautista Agut earlier Sunday.
Nadal was untouchable this the week, going 8-0 while facing just three break points throughout the Davis Cup Finals, including one from Shapovalov in the second set. He improved to a staggering 29-1 in singles matches in his Davis Cup career.
The Canadian team was competing in the final at a Davis Cup for the first time. Canada first appeared in the international team tournament in 1913 and its previous best finish was a semifinal loss in 2013.
Spain, playing in its 10th final, earned its first title since 2011.
Shapovolav had 27 winners to Nadal's 24 over the nearly two-hour long match. But the Canadian also made 36 unforced errors to Nadal's 20.
The 20-year-old Shapovalov was the only Canadian player to have beaten Nadal in a previous match. He stunningly defeated the Spaniard in the round of 16 at the Rogers Cup in 2017 - Shapovalov's breakout season on Tour - in their first career meeting. Nadal took the next matchup last year at the Rome Masters.
The two were scheduled to meet in the semifinals at Paris earlier this month but Nadal withdrew with an abdominal injury, allowing Shapovalov to reach the finals of a Masters 1000 for the first time.
Spain draws first blood
Bautista Agut delivered the first blow to Canada's hopes of capturing its first Davis Cup title when the 31-year-old veteran defeated Auger-Aliassime 7-6 (3), 6-3 earlier Sunday.
Bautista Agut, ranked No. 9 in the world, was playing his first match since the death of his father earlier this week. He left Spain's Davis Cup team on Thursday but returned in time for the final.
The No. 21-ranked Auger-Aliassime, who missed six weeks of action with an ankle injury, was playing for the first time since the opening round of the Shanghai Masters in early October.
The 19-year-old began the year ranked outside the top 100, but made the finals at three ATP tournaments (Stuttgart, Lyon and Rio) to reach a career-high No. 17. He was 33-22 on tour this season.
Auger-Aliassime wasn't cleared to play for Canada at the Davis Cup until Thursday's quarter-finals. But he remained on Canada's bench temporarily while Vancouver's Vasek Pospisil - the Davis Cup veteran on the team at 29 years old - rode a wave of momentum that included upset singles wins over three higher-ranked opponents throughout the week.
Dominant duo
The Canadian team was missing No. 31 Milos Raonic to injury. Brayden Schnur replaced Raonic on the roster but stayed on Canada's bench after pulling a back muscle this week.
That left Pospisil, ranked No. 150, and Shapovalov to play each of Canada's singles and doubles matches at this Davis Cup before Sunday. The pair would have teamed up again for the deciding doubles match, if needed.
Canada had been on a tear throughout the week at the Davis Cup Finals.
They defeated Italy and the United States in the group stage before dispatching Australia in the quarter-finals on Thursday. They then earned their spot in their first final with a thrilling 2-1 win over Russia Saturday that included a third-set tiebreak in a deciding doubles match.
Canada had not beaten the U.S. or Australia at a Davis Cup until this tournament.
Canada guaranteed its spot in the Davis Cup Finals tournament in 2020 by reaching the semifinals this year. Spain, Britain and Russia also finished top four to secure entries while France and Serbia were granted wild-card entries. The rest of the field will be filled through qualifiers.
Recent Davis Cup champions
2019 - Spain
2018 - Croatia
2017 - France
2016 - Argentina
2015 - Britain
2014 - Switzerland
2013 - Czech Republic
2012 - Czech Republic
2011 - Spain
2010 - Serbia
Source: CBC News