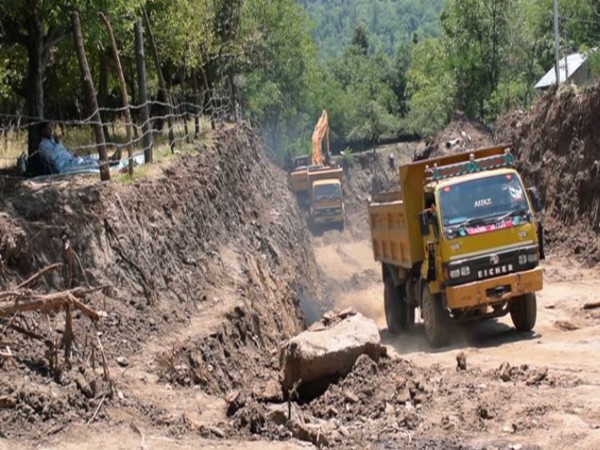 Pulwama (Jammu and Kashmir) [India], July 27 (ANI): The construction work of the Tral Lift Irrigation Scheme gained momentum after Jammu and Kashmir became a Union Territory in 2019. This prestigious scheme is a three-staged lift irrigation project and it is being implemented at a cost of 170.50 crore under the Accelerated Irrigation Benefits Programme (AIBP) and Pradhan Mantri Krishi Sinchayee Yojana (PMKSY) having an irrigation potential of 4,818 hectares.
Stage I and Stage II (partly) of the scheme were commissioned some time ago and work was going at a low pace for Stage III, but now the work has started on a war-footing as the administration directed the officials to complete this project by the end of this year.
The mega scheme is situated in Tral town of the Pulwama district and was envisaged to provide irrigation facilities in 22 villages of Tral and Awantipora blocks.
According to Executive Engineer, Irrigation and Flood Control Tral, the execution work of this mega project is being monitored by the Prime Minister's Office (PMO).
The government of the Union Territory showed great interest in this project. We are following the SOPs provided by the government amid the COVID-19 crisis. This is a three-stage scheme," he added.
Local villagers hailed this step taken by the government as it will resolve the irrigation problems that they face summer due to the drought-like situation. This construction work also provides employment to several local labourers and work is done under proper SOP guidelines.
"I am a resident of Tral. The construction work is being carried out smoothly here. A lot of schemes have been launched since Jammu and Kashmir became a Union Territory. I am really thankful to the Central government as unemployment issue has also been addressed here," said Imroz Wani, a local villager.
"We are really happy as the work is going on smoothly. If the work continues to run at the same pace, it will be finished soon," said Gulzar Ahmad, another villager.
The command area of the scheme inhabits with people having agriculture as their foremost occupation.
The agricultural work here is dependent on natural rains. In order to provide irrigation facilities to these villages, the scheme has been envisaged so that the objective of the social-economic upliftment of the beneficiary agrarian community is realised.
"The labourers here are provided with employment opportunities. The surrounding area here will be irrigated by the help of this project," said Manzoor Malik, a local labourer. (ANI)