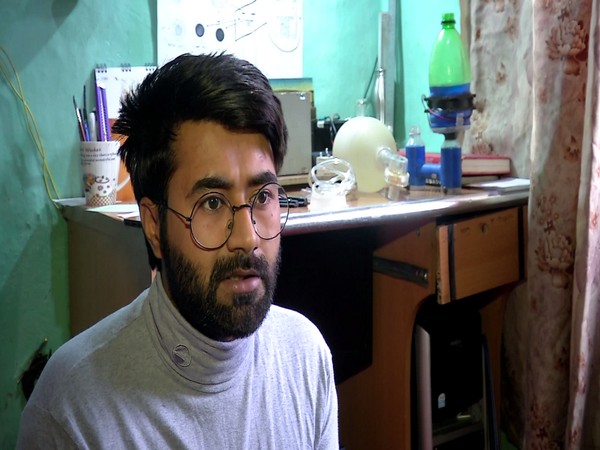 Srinagar (Jammu and Kashmir) [India], July 29 (ANI): Waseem Ahmad Nadaf, popularly known as 'Unique Waseem' for his penchant for uncommon innovations, has developed a ventilator from scrap.
The Srinagar-based 22-year-old has developed a small-sized ventilator which he says will prove handy in providing life support to the poor and underprivileged at the time of crisis.
With 32 innovations under his belt already, Waseem says that he was mulling over developing a device to battle COVID-19 since its outbreak.
"Ever since the coronavirus pandemic broke out, I was thinking of developing something like this. Solutions can come from anywhere but the most important thing is that you have to be efficient and cost-effective, because poor people living in the slums cannot afford conventional ventilators. So, I collected scrap available at home, observed it and utilised it into developing this model, which can be used as a prototype and later be modified into a ventilator. So, at the local level, where there are no ventilators, we can set it up and save many lives," he said.
Waseem added, "I have used different types of scrap including, parts of a computer, a few from VCD players and some from the inverter. So, I have used multiple things. Moreover, as I have told my friends and relatives to give me their old and useless items, so I already have a lot of scrap with me at home. Out of the scarp only, I perfectly assembled a few things and gave them this shape."
At a time, when the entire world is reeling under the menace of the deadly COVID-19, Waseem's innovation is no short of a boon for patients.
Waseem has also made a unique three-layered mask to prevent the spread of the virus. Khadi, paper and aluminium have been unusually incorporated into preparing the mask.
Waseem says he has been working on optimising waste into developing cost-effective products for years.
He had first hogged the limelight in 2012 when he had developed a unique power inverter with 30-minute charging time and a 30-hour back-up.
Waseem has been acknowledged and encouraged by many across India and the world for his endeavours towards making the common man's life easy.
Last year, Waseem was awarded Rs 1 lakh by the Start-Up India Foundation for his innovations. (ANI)