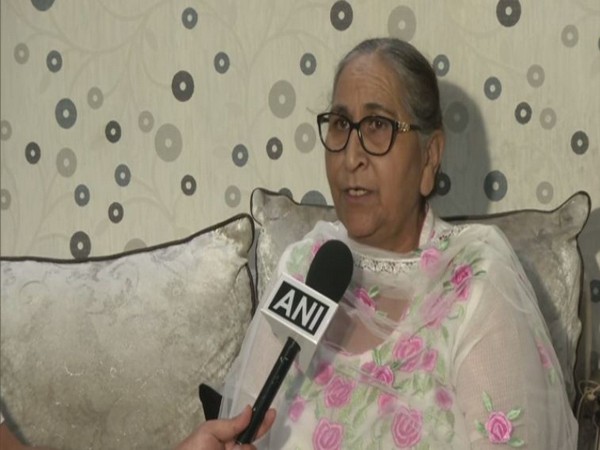 Chandigarh (Punjab) [India], Sep 1 (ANI): Dalbir Kaur, sister of Sarabjit Singh on Sunday condemned the silence of Pakistani Prime Minister Imran Khan over the forced abduction and conversion of Sikh girl, Jagjit Kaur in the neighbouring country.
Sarabjit had died in Lahore after he was brutally attacked in Pakistan's KotLalpat Jail by fellow prisoners in 2013.
She condemned the silence of Imran Khan and pro-Khalistani leaders Gopal Singh Chawla, Gutpatwant Singh Pannu and asked Indians to not rest until justice is achieved.
"I want to ask liar and coward Imran Khan, who is a cheat, who says something and does something else ...we knew that Pakistan is a betrayer but the murder of humanity is just too much (hadd to tab ho gayee jab manavta ka wahan pr katl kr diya gaya).
She said she would organise protests at Sirsa and Ludhiana over the issue and has appealed to the people to join her.
"We need to come together irrespective of our community against this coward and cheat Imran Khan. Our government should also take steps regarding this. We should not sit idle until Imran Khan doesn't criticise and apologises for this," she added.
Recently, two incidents of forced conversion have surfaced in Pakistan indicating the miserable conditions in which minorities are living in the country.
Jagjit Kaur, 19, who went missing for a number of days, was found on Thursday after she was forcibly converted to Islam and made to marry a Muslim man. Daughter of Bhagwan Singh, a 'granthi' (priest) of Gurudwara Tambu Sahib, she was converted to Islam at gunpoint.
On Saturday, it was reported that another girl identified as Renuka Kumari was abducted from her college in Sukkur in Sindh province of Pakistan.
The incidents have sparked a furore in India, with several political leaders across parties seeking action against the perpetrators.
On August 30 also, India had asked for immediate remedial action after reports of the abduction and forceful conversion of Sikh girl in Pakistan.
"The Ministry has received a number of representations from various quarters of civil society in India, including Sikh religious bodies in India, at the reports of the incident of abduction and forced conversion of a minor Sikh girl in Pakistan. We have shared these concerns with the Government of Pakistan and asked for immediate remedial action," the MEA spokesperson had said.
Pakistan has also repeatedly called by the international community to end discrimination against religious minorities on its soil, which are manifested in various forms of targeted violence, mass murders, extrajudicial killings, abduction, rapes, forced conversion to Islam, etc., making the Pakistani Hindus, Christians, Sikhs, Ahmadiyyas and Shias one of the most persecuted minorities in the region.
Last month, the United States, the United Kingdom and Canada raised the issue of suppression of religious freedom by China and Pakistan in the United Nations and slammed the two Asian nations for "persecuting and repressing" their religious minorities. (ANI)