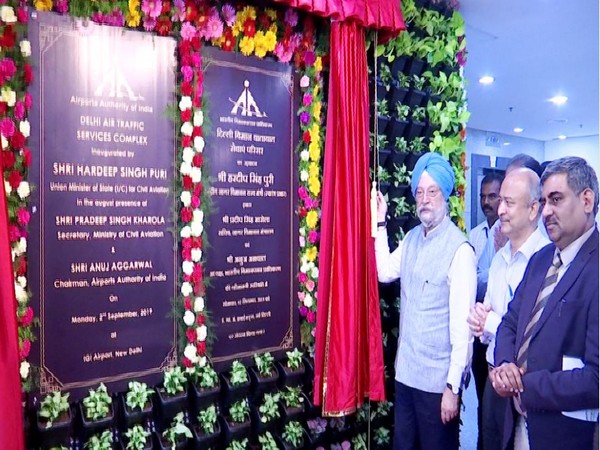 New Delhi [India], Sept 2 (ANI): Union Civil Aviation Minister Hardeep Singh Puri on Monday inaugurated a state-of-the-art ATC complex to enhance the air traffic movement at the Delhi International Airport.
Hardeep Singh Puri, Union Civil Aviation Minister said, "It is the tallest tower in India and one of the tallest in the world. It has all the latest technology and at a time when Indian civil aviation is growing at a very impressive pace."
"I am delighted, today we are formally inaugurating this tower and as I said earlier it is good to have the latest technology, the best equipment and it is also very reassuring that the people who man the equipment- they are Air Traffic controllers who are amongst the best in the world," he added.
The new state-of-the-art ATC complex with new ATC Tower is equipped with upgraded and world-class infrastructure. The total cost of the project is approximately Rs. 400 crores.
Several dignitaries, including Civil Aviation Secretary Pradeep Singh Kharola and Chairman of Airports Authority of India Arun Aggarwal were present on the occasion.
The growing number of travellers and rising frequency of daily flights has put Indira Gandhi International Airport here among the World's busiest airports.
In 2018-19, the airport handled over 69 million passengers and 4,60,000 air traffic movements.
Currently, Delhi's ATC works round the clock and manages around 1,260 flights daily with 75 peak hour handling capacity. The mounting air traffic each year poses a test for the men and machine.
Anuj Aggarwal, Chairman, Airports Authority of India said, "The new tower which has been made, has taken care of the new runway which is coming up, so we will have the complete visibility, not only the approaches to the runway but also the complete apron in the parking bays and so this will have a better visual experience for the air traffic controllers and thereby we will we having better safe operations".
Videh Jaipuriar, CEO, DIAL said, "Along with the movement to the new ATC tower, Air Traffic Controllers are also getting trained for high-intensity runway operation, so that training along with the new ATC tower transition is going to push up our daily movement by at least 200 movements per day."
At 101.9 meters, the new ATC tower is the tallest ATC tower in India and zooms over the current 60-meter-high tower.
It has 21 controller positions with a 360-degree view at the visual control room (VCR) which is at 26th level. The ATC tower has 12 ground controller positions at the operational level.
Sugandha Vishnoi, Junior Executive, ATC, Delhi said, "It is the tallest ATC tower in India, so because of this height we have a birds-eye view of each and every corner of the operational area. This helps us in providing better surveillance and better controlling".
The new ATC tower is equipped with Tuned Mass Damper (TMD), a technology to protect the building from extra sway during the critical wind. The technology has been used for the first time in India.
S P Pandey, GM (CNS), AAI said, "They are totally integrated in ATM automation system and we are going to have seamless surveillance coverage in our daily FIR. So it is going to enhance our surveillance coverage".
With the new ATC tower in place, the Airports Authority of India aims to improve the operational efficiency of Delhi's international airport.
The world-class infrastructure will also be a visual delight in the landscape of the capital of the country. (ANI)