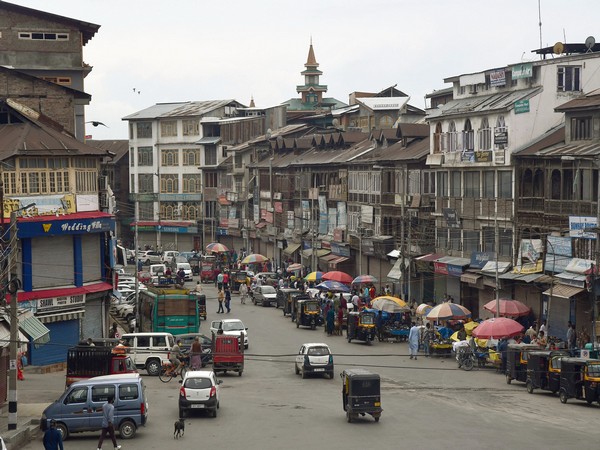 Srinagar (Jammu and Kashmir) [India], July 28 (ANI): After the Article 370 abrogation last year, Jammu and Kashmir residents said that the Valley is now moving towards new avenues of development and also claimed that stone-pelting incidents in the region have drastically come down.
Waseem Ahmad, a businessman in Srinagar said that people of Jammu and Kashmir were bereaved of benefits of centrally sponsored schemes before August 2019.
"Our people were bereaved of benefits earlier from the central schemes because there was Article 370. After it was abrogated, our people could get those benefits as well as Constitutional rights. Development works have sped up now. Stone pelters were dealt with strictly. It was a historical step of the central government to abrogate Article 370," Ahmad said.
"Ratio of stone-pelting has gone down to zero. Due to unemployment, youth indulge in stone-pelting incidents. After Article 370 was revoked, development works started, the youth started participating in developmental cause instead of stone-pelting," he added.
Sarwar Hussain, a local school teacher, while speaking to ANI, said, "After J-K became Union Territory, no incident of stone-pelting took place. This happened because Article 370 was abrogated. Our sisters and daughters who did not get rights after marriage now will get their rights too. This was a good step for Kashmir that Article 370 and 35 A were revoked."
Stone-pelting incidents and consequent shutdown had hampered the developmental work, however, locals feel the Valley is now on the path of progress and prosperity.
Ashiq Hussain, a youth leader from Baramulla blamed Article 370 for stone-pelting incidents in the region.
"Due to Article 370, there were stone-pelting incidents. These days you will not see stone-pelting incidents. We are thankful to the Central government," he said.
Stone pelting, as the name suggests, refers to assault by throwing stones, by a section of Kashmiri youth on security forces, deployed for crowd control. The deadly attacks became a routine form of protest in the streets of Srinagar.
There were 2,653 incidents of stone-throwing in 2016. A probe by the National Investigating Agency in 2017 revealed that Pakistan routed money into the Kashmir Valley to be paid to stone-pelters. Young men were paid Rs 500 each for throwing stones on Army and other defence forces.
From August 2019 when Article 370 was abrogated, till January 2020, stone-pelting incidents in Kashmir came down by 40 to 45 per cent, the Central government had stated.
Ghulam Hassan, a Sarpanch from Pulwama said that money is being deposited in bank accounts of sarpanches for the development work in the region.
"Earlier, political leaders used to call officers due to which work suffered. After the Union Territory government formed, we want all central schemes to be implemented here to solve the unemployment problem," Hassan told ANI.
As per many locals, development works have picked up pace which in turn has benefitted them through several Central government schemes.
"There were panchayats before 2011 but works that are being carried out now are way better than that time. The money of PMGSY (Pradhan Mantri Gram Sadak Yojana) comes in Sarpanch's account. The condition is improving now. We are satisfied with the UT government. Free ration and gas connections are also being provided to people here," he said.
Sarwar, the local teacher also believes that the "historic" step has enabled large scale development in the UT.
"During the lockdown, Rs 500 was deposited by the government in Jan Dhan bank accounts of poor people. After UT was formed, Kashmiri youth wants speedy development. Central schemes like scholar schemes are being given to J-K students," he added. (ANI)