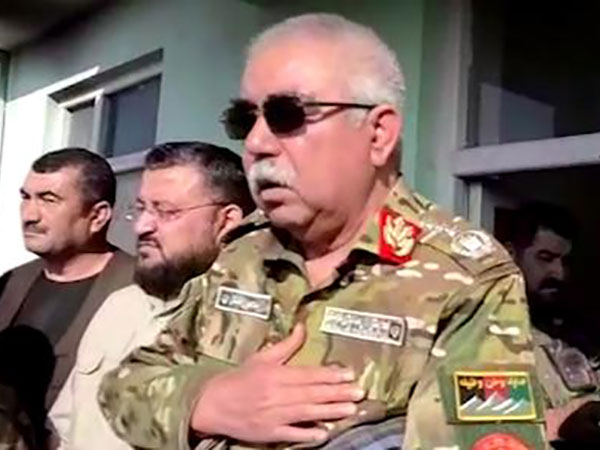 Kabul (Afghanistan) Nov 1: First Vice President Abdul Rashid Dostum, who visited Aqcha district in Jawzjan province on Wednesday, said he stands by Afghan National Defense and Security Forces and will continue fighting terrorism. He also mentioned that he holds many sessions on a daily basis to discuss peace in Afghanistan.
According to local officials, the Taliban attacked Aqcha district in the northern province of Jawzjan on Monday.
Dostum's aides said his convoy came under Taliban attack when they were traveling to the embattled Aqcha district from the capital city of Sheberghan. His aides said no one was hurt in the exchange of fire between both sides.
"Roll up your sleeves. You are familiar with the terrain. I am with my soldiers. I have supported them. We will eliminate them (the militants) within three months," Dostum told his supporters at a gathering in Aqcha district.
The first vice president, who has not attended his office for the past few months following sexual abuse allegations lodged against him by one of his former aides, called on Aqcha residents to support the Afghan forces in their fight against the Taliban.
"I can feel your concerns and the concerns of the district governor," Dostum added.
A member of Jawzjan Provincial Council, Amruddin Danishjo, said Mardian district has been under Taliban siege over the past week and that other districts such as Aqcha, Qarqin, Mugachek and Khanaqa are facing high-security threats.
"The situation is very concerning, especially in Murdian district where security forces have been under siege for the past fifteen days," Danishjo said.
Local officials in Jawzjan confirmed the clashes in which militants suffered heavy casualties.
"Heavy clashes are ongoing in Murdian, Aqcha, Faizabad, Khanaqa, Mungachek and Darzab districts for the past three days and 25 militants were killed and 15 others were wounded," Jawzjan governor's spokesman Abdul Maruf Azar said.
The spokesman did not mention about possible casualties among Afghan forces. But sources told TOLOnews that five members of the Afghan Army surrendered to the Taliban in Aqcha district.
Source: Tolo