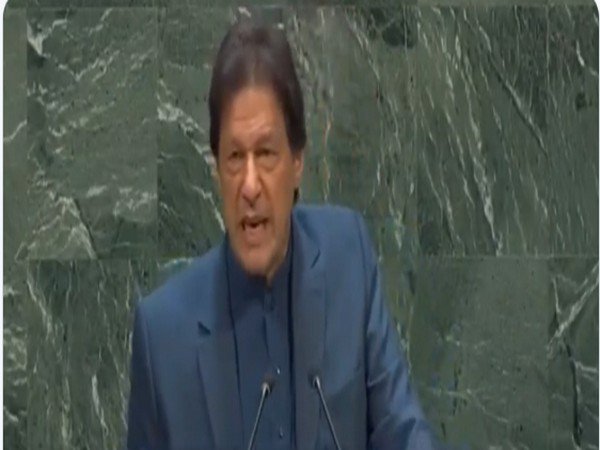 Amsterdam [Netherlands], Oct 5 (ANI): In line with Pakistan's track record, Prime Minister Imran Khan has once again proven that he is not a genuine friend of the people of Jammu and Kashmir, for whom he is deceitfully pretending to agitate, said a European think-tank on Khan's speech at United Nations Security Council (UNGA).
"In its speech at the UNGA, he desperately tries to exculpate Pakistan from any past or future wrongdoings vis-a-vis Jammu and Kashmir and mischievously instigates the Kashmiri youth to pick up arms, while he keeps threatening the world of a nuclear war," said Amsterdam-based European Foundation for South Asia Studies (EFSAS).
It further said that one important point that Khan has not yet revealed is who exactly has authorised him to exhort Kashmiris to spill their blood and lay down their lives.
"If the answer is the Pakistani military establishment, as is almost certainly the case, it is about time that it recognized that the days of it fraudulently empowering itself through pulling wool over the eyes of Pakistani citizens on Kashmir now appears to be a thing of the past," said the think-tank.
In his address to the 74th Session of UNGA, Pakistani Prime Minister Imran Khan on 27 September embarked on a fifty-minute diatribe against India with disdain for the sanctity of time of other participating world dignitaries.
Khan devoted a considerable amount of time to accusing the western world of Islamophobia, announcing at the outset that he had long harboured the desire to educate the audience at a prominent global stage on Islam and its followers.
He had said, "There are 1.3 billion Muslims in this world. Millions of Muslims are living in the US and European countries as minorities. Islamophobia, since 9/11, has grown at an alarming pace. Human communities are supposed to live together with understanding among each other. But Islamophobia is creating a division. Muslim women wearing hijabs has become an issue in some countries as if a hijab is some kind of weapon.... This is happening because of Islamophobia. Why did it start? Because certain western leaders equated terrorism with Islam, calling it Islamic terrorism and radical Islam. What is radical Islam? There is only one Islam. This Islamic radicalism has been the main reason behind Islamophobia. This has caused pain to Muslims."
Pakistan's role in promoting and sponsoring terrorism, especially against its immediate neighbours Afghanistan and India, is now common knowledge and a widely accepted fact.
So are the linkages with Pakistan of most major terrorist attacks that have taken place across the world in the last few decades.
Unsurprisingly then, just a few hours prior to Khan's speech, Alice Wells, US acting Assistant Secretary for South and Central Asia, speaking on the prospects for improvement of relations between India and Pakistan, said, "Obviously, that is going to hinge off of counterterrorism, off of Pakistan's seriousness of effort in ensuring that (terrorist) groups don't take advantage and engage in cross-border infiltration (into India), that there are serious steps to implement the Financial Action Task Force action plan that Pakistan has committed to, and which includes the prosecution of UN-designated terrorists. So whether it's Hafiz Saeed who currently is in custody and under prosecution, but also leaders of Jaish-e-Mohammed, like Masood Azhar, who long have been able to exploit their presence on Pakistani soil".
Similarly, Afghan National Security Advisor (NSA) Hamdullah Mohib, speaking at the Council on Foreign Relations (CFR) think-tank on October 2, described the Taliban as a proxy of Pakistan and its intelligence agency Inter-Services Intelligence (ISI), and added that his country would never accept being ruled by the "proxy" of a backward country that has a "hard time feeding its own people".
The situation in Jammu and Kashmir was the other issue that Khan dwelt on at length in his speech.
In a most appalling display on the floor of the UN of blatant encouragement of terrorism by the leader of a country, Khan said, "You think Kashmiris will accept a new status quo under revocation of Article 370 (of India's Constitution)... What will happen when the curfew is lifted? (Indian Prime Minister) Modi says this is done for the prosperity of Kashmir. But what will happen when 8 million Kashmiris come out of a lockdown and face 900,000 troops? I fear there will be a bloodbath."
He added, "I picture myself... I am in Kashmir, I have been locked up for 55 days... Would I want to live this humiliation? Would I want to live like that? I would pick up a gun. You are forcing people into radicalization. When people lose the will to live, what is there to live for?"
"In a tone entirely contrary to Khan's, Indian Prime Minister Narendra Modi, who addressed the UNGA an hour prior to Khan, dwelt mostly on larger global issues. His fifteen-minute speech, in consonance with his country's position that dilution of Article 370 of its Constitution was entirely an internal matter, did not contain even a single mention of Pakistan or J&K", said EFSAS in its commentary. (ANI)