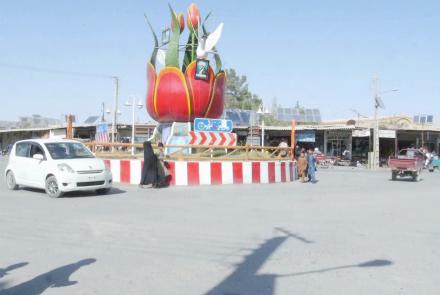 Kabul (Afghanistan) Nov 9: Farah city residents expressed happiness over the improvement in security after this summer's heavy clashes between Afghan security forces and the Taliban on the city's outskirts.
However, they asked that security forces step up their efforts to improve the situation in other parts of the province, where, according to them, threats still exist.
"The security situation in the city of Farah has improved over the past few months. The security forces made a lot of effort. We want more efforts to ensure the security of the whole province," said Naqibullah, a Farah resident.
"The security situation in the city of Farah has improved. There were lots of assassination cases, there were clashes, but now the situation is better," said Abdul Sattar, a Farah resident.
Security officials said the outskirts of the city of Farah have been cleared of militants and their hideouts have been destroyed.
"We defused 116 different types of mines from different parts of the city of Farah over the past two months," said Mohibullah Mohib, a spokesman for the Farah police.
According to local officials, many investors left the province after an increase of threats and security incidents in the province began two years ago.
But the NDS chief in Farah, Samad Shams, said investors should remain within Farah because their safety will be ensured by Afghan forces who are attempting to fully clear the province of militants.
"They should not transfer their capital to other provinces. We are fully committed to ensuring their safety," Shams said.
A member of the provincial council, Dadullah, also called for more military operations in the villages and districts of the province, not just in Farah city.
Source: Tolo