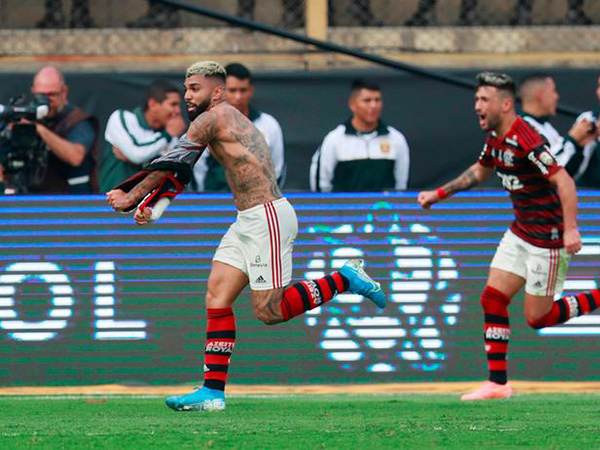 Lima (Peru) Nov 24: The force was with Flamengo on Saturday as the Brazilian side stunned Argentina's River Plate with two late goals to win the Copa Libertadores final in Peruvian capital Lima.
Rafael Santos Borre's first-half goal looked to have secured River a fifth Copa Libertadores title but Gabriel Barbosa had other ideas.
Barbosa's close-range finish on 87 minutes drew Flamengo level and soon after the 23-year-old striker pounced to lash the ball past River keeper Franco Armani.
Barbosa then proceeded to get himself sent off after picking up a second yellow for sarcastically applauding Chilean referee Roberto Tobar.
River Plate also finished the game with 10 men as Exequiel Palacios was red carded for kicking Bruno Henrique while the Flamengo player was on the floor in the game's chaotic final moments.
Flamengo's only previous Copa Libertadores final victory came in 1981.
'Star Wars' Stormtroopers
The preamble to Saturday's showpiece -- South American club football's answer to Europe's Champions League final -- had plenty of glitz and glamor.
A delegation of "Star Wars" Stormtroopers escorted the Copa Libertadores trophy out onto the pitch at Lima's Estadio Monumental, while Brazilian singer Anitta, who has 42 million followers on Instagram, and Argentine rockers Turf entertained fans prior to kick-off.
Until those dramatic final minutes the match at the 80,000 capacity Monumental didn't quite hit the high notes that neutrals might have hoped for in what was scrappy, attritional game for long periods.
Borre had given River a first-half lead, capitalizing on some indecisive Flamengo defending to swivel and sweep the ball past Diego Alves.
River's organization and gritty defending was frustrating Flamengo and Borre went close to grabbing a second goal with a powerful shot.
Just before the hour the Brazilian team almost snatched an equaliser, but Everton Ribeiro's close-range shot was well saved by Armani.
Before the start of the game Barbosa had touched the Copa Libertadores trophy, prompting some on social media to joke that the Flamengo striker had jinxed his team. One of the widely held superstitions in football is that you should never touch a trophy before a final.
But Barbosa had the last word with his eye for a goal delivering an extraordinary climax in Lima.
Social unrest in the Chilean capital of Santiago had forced the final to be moved to Lima because of the violence that has gripped Chile.
Last year, River and national rival Boca Juniors played the second leg of the final in Madrid, Spain. River fans had attacked the bus carrying the Boca squad outside the host stadium in Buenos Aires.
This year's final was the first to be settled in one match.
Since 1979, Copa champions were decided over two legs with both teams getting the chance to play in front of their home fans. Before that - from the tournament's inception in 1960 - finals were contested over three matches.
Flamengo's Copa Libertadores' victory means the Brazilian side will now take part in the Club World Cup -- staged in Qatar -- December.
After winning the Copa Libertadores in 1981, Flamengo then went on to beat Liverpool 3-0 in the Intercontinental Cup final.
Liverpool, who beat Tottenham to win the Champions League in June, will also take part in this year's Club World Cup.
Source: CNN News