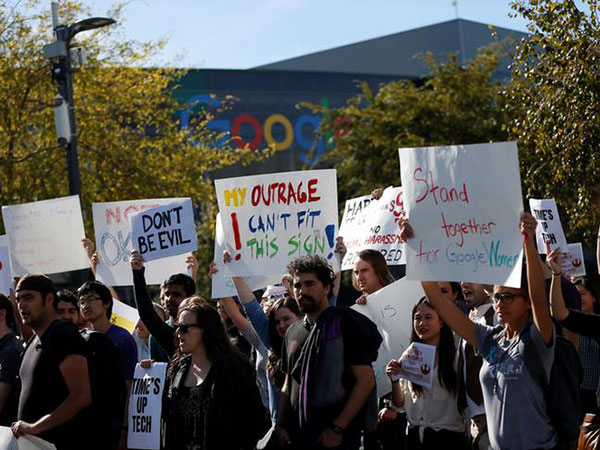 Washington DC (USA) Nov 22: Search giant Google is dealing with another bout of unrest among its workers -- with a protest expected to take place Friday regarding its treatment of employee activism.
Protesters will speak out against the way the company has treated a handful of employees for their organizing efforts, as reported by multiple outlets on Thursday.
Google put two employees on administrative leave for purportedly violating company policy by looking up calendars and documents. Organizers want them reinstated.
Protesters allege it is part of a "brute force intimidation attempt" on behalf of the company, as reported by Forbes. The employees placed on leave allegedly spoke out against Google's contracts with U.S. Customs and Border Protection and other issues.
The publication reported an internally circulated memo sent by organizers to Google workers asks them to "demand an end to the escalating pattern of intimidation" in order to "save Google's open culture."
A Google spokesperson says the company will investigate and take action against violations of its policies, especially when confidential material is involved. The company also says none of its workers were put on administrative leave for accessing one document or simply reviewing a calendar meeting. It is common practice for the company to put an individual on leave during an investigation into certain claims.
Google has been contending with mounting employee unrest, including a number of protests throughout recent months.
Last month, employees accused the company of building a surveillance tool they thought could be used to interfere with their attempts to organize. They were required to install it on their computers.
In May, the company staged a sit-in protest - six months after more than 20,000 marched out of their offices - regarding how sexual misconduct claims against executives were handled.
Workers also spoke out against the company's work on a China-specific search engine.
Concerns about dealings with the Pentagon also caused Google to decline to renew a contract with the U.S. Department of Defense - and to rethink how its technology was used by the U.S. military.
The latest protest is expected to take place in San Francisco, near Google's office, on Friday morning.
Source: Fox News