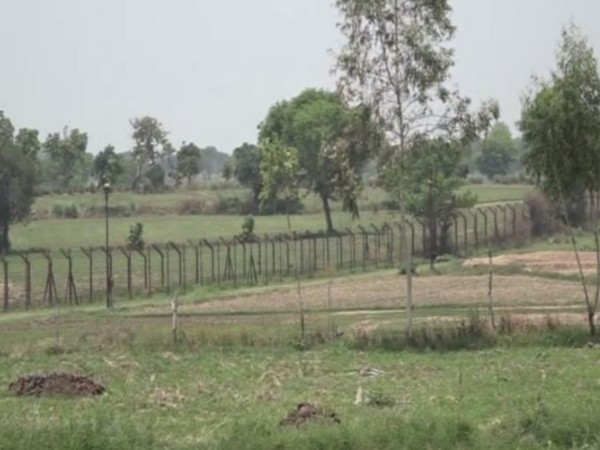 Kathua (Jammu and Kashmir) [India], September 15 (ANI): After a gap of 18 years, the government is taking steps to cultivate land on the zero line in border areas in Jammu and Kashmir's Kathua.
To assess the ground realities on the zero line and prepare for farming, Deputy Commissioner Kathua OP Bhagat, a Border Security Force official, the Chief Administrative Officer, Agriculture Department and a border area panchayat representative convened a meeting on the zero line at BOP Manyari on Monday.
All the preparation of farming, demarcation of farmers land and obstacles like land mine threat were discussed at the meeting.
They also took a tour of zero line on fencing point in a bunker vehicle and assessed the ground situation and viabilities of farming. The Pakistan farmers are cultivating their field up to the zero lines but in Hirangar sector nearly 3,500 canals of land are lying uncultivated due to indiscriminate firing by Pakistan.
The Deputy Commissioner Kathua OP Bhagat after meeting with stakeholders assured the farmers that next crop of wheat will be cultivated on zero line across the fencing in the month of October.
The Government will provide all possible help to the farmers such as equipment, tractors and security cover by the Border Security Force. Bhagat has asked the farmers to be ready for zero line farming as the Jammu and Kashmir Union Territory (UT) Government is interested in cultivating the whole land across the fencing. It would also help the BSF to maintain a vigil on the zero line.
"We came here to assess the viability and process of sowing. Farmers are encouraged for the same and I hope we will be able to successfully sow wheat crop here. We are trying to bring farmers here for sowing and ploughing. It will benefit the farmers as well. It will clear the line for BSF officers here which will reduce insurgency and shelling," said Bhagat.
The BDC chairman Marheen Block Karan Kumar and border resident Ashok Kumar were also present here and appreciated the initiative of the government to cultivate fields on the zero line land after a long period of 18 years.
They cheered up after getting government support for cultivation of uncultivated land which has been lying barren for two decades. It was a demand of border farmers.
Ashok Kumar, "The DC along with other officials came here for the assessment. The governor has also instructed us to do farming here that will have numerous benefits. The government and BSF is ready to help us. We would like to thank the UT government for this initiative."
"Out of 22 panchayats, 20 panchayats are on the border. This land has been barren for a long time. The DC has instructed BSF officials to prepare this land for farming. This will benefit the farmers," said Karan Kumar, BDC chairman Marheen border. (ANI)