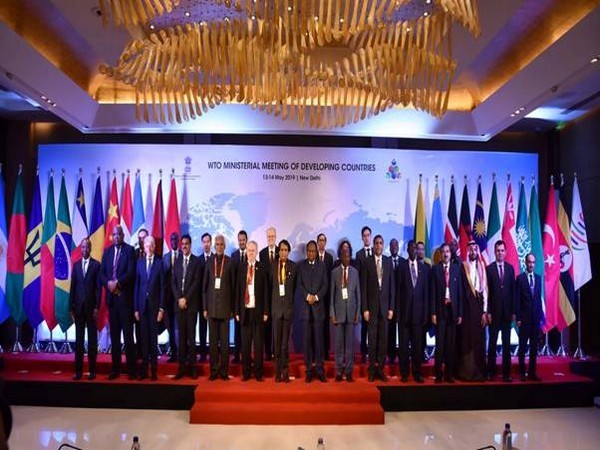 New Delhi [India], May 14 : Commerce and Industry Minister Suresh Prabhu said on Tuesday that the World Trade Organisation (WTO) must address concerns of 7.3 billion people living in developing countries so that benefits of growth percolate to them.
The multilateral trading system is a collective responsibility of all countries who have a stake in it, he said.
"It is the duty of countries to successfully address conflicting interests, motives and ideologies to preserve and strengthen this valuable institution," he said while addressing leaders at the concluding session of two-day WTO ministerial meeting of developing countries.
"The principles of non-discrimination, predictability, transparency, the tradition of decision-making by consensus and, most importantly, the commitment to development underlying the multilateral trading system are too valuable to lose," said Prabhu.
In his address at the dinner on Monday, Prabhu said trade tensions show no signs of abating and protectionist tendencies are on the rise. This makes it essential to collectively debate and discuss the way forward in a multilateral framework.
He hoped the New Delhi ministerial meeting will re-endorse the centrality of development in WTO negotiations and provide suggestions for WTO reforms with development at its core.
Meanwhile, WTO Director General Roberto Azevedo said the dispute settlement mechanism is in deep crisis and all countries must look for a resolution. "Business-as-usual approach is not an option anymore, and all members should work for a solution."
Azevedo said that plurilaterals should not be seen as a division between developed and developing countries as they contain members from both sides.
"The special and differential treatment mechanism must be innovative in order to address the impasse. If left unaddressed, it may go either way. The best way forward is to have a trade facilitation agreement type of model where countries may set their own benchmarks."
(ANI)