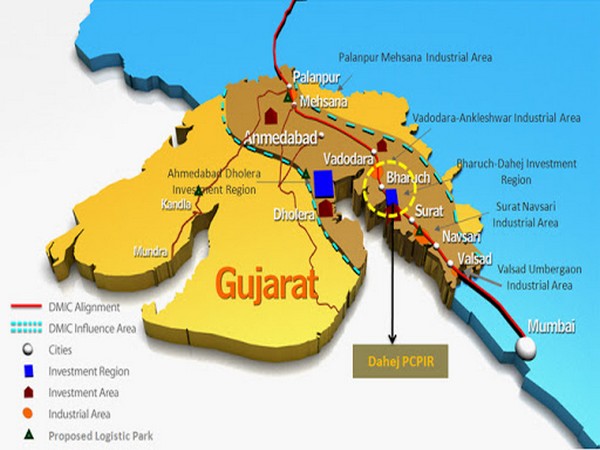 Ahmedabad (Gujarat) [India], June 20 (ANI): With its strategic location and business-friendly policies, Gujarat has rapidly emerged as a preferred destination for domestic and foreign direct investments.
The major sectors in which investments have poured in include textiles, chemicals, auto and auto components, plastics, energy and power besides food processing. The western state provides a robust industrial ecosystem, transparent and investor-friendly policies, infrastructure and relentless government support to the enterprises in doing business.
Over the years, Gujarat has been ranked among the top in Ease of Doing Business which led to double-digit growth rates. In the past five years, it registered an average growth rate of 10.14 per cent at constant price.
The state has developed 48 ports along the 1,600 km coastline which are backed with a widespread network of railroad connectivity.
Besides special economic zones, it has established special investment regions and smart industrial cities. Almost 40 per cent of Delhi Mumbai Industrial Corridor (DMIC) passes through Gujarat.
State officials say the DMIC artery will help develop special investment regions like Dholera, Mandal Becharaji and Petroleum, Chemicals and Petrochemicals Investment Region (PCPIR).
The 90 billion dollars dedicated freight corridor between Delhi and Mumbai passing through Gujarat connects major industrial nodes of the state. About 67 per cent of the work is already complete and the rest will be operational in the coming months.
India's largest industrial greenfield development of over 920 sq km at Dholera Special Investment Region has a blanket environmental clearance which allows land allotment to be completed to an industry within 17 days.
The region is expected to attract investment to the tune of 13 billion dollars. The world's largest solar park with five gigawatts of capacity is being developed at Dholera Special Investment Region.
India's first dedicated Petroleum, Chemical and Petrochemical Investment Region (PCPIR) in Dahej is spread across 453 sq km and has already attracted investments worth 11 billion dollars, creating employment for 1.32 lakh people.
Emerging as the world's largest auto hub, Mandal Becharaji Special Investment Region (MBSIR) is a hotbed for Japanese automobile and auto component manufacturing industries.
Companies like Suzuki Motor Corp, Honda Motorcycles and Scooter India and Toyota Tsusho India have established their units within MBSIR. India's first lithium-ion battery plant is also being set up within MBSIR by a consortium of Suzuki, Toshiba and Denso.
The Gujarat International Finance Tec City (GIFT) in Gandhinagar has attracted investment commitments of 1.57 billion dollars in the first phase and has a workforce of over 10,000 employees in 225 companies.
GIFT Special Economic Zone is the only international financial services centre where the average daily volume traded averages at 4 billion dollars. The London Stock Exchange and the National Stock Exchange of India have signed a memorandum of understanding for dual listing of masala bonds to promote bilateral trade and mutual investment.
On the other hand, the Diamond Research and Mercantile City is being built on 2,000 acres of land in Surat. It is expected to emerge as a global a hub for diamond polishing and allied industries. (ANI)