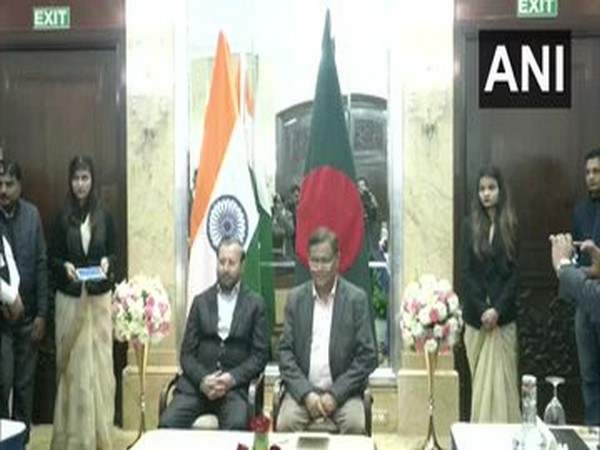 New Delhi [India], Jan 14 (ANI): India and Bangladesh on Tuesday signed a Memorandum of Understanding (MoU) for the co-production of a biopic on Bangladesh's founding father Sheikh Mujibur Rahman.
The MoU was signed between National Film Development Cooperation of India and Film Development Cooperation of Bangladesh following talks between Union Minister of Information and Broadcasting Prakash Javadekar and his Bangladeshi counterpart Muhammad H Mahmud at the India Bangladesh Information and Broadcasting Ministers' Meet 2020 held here.
The biopic will be directed by acclaimed filmmaker Shyam Benegal and will be released in March 2021 as part of centenary celebrations of Banga Bandhu.
Speaking on the occasion, Javadekar said that India and Bangladesh are organic friends and share a great legacy.
The two ministers also launched the content sharing programme between Bangladesh's state-owned radio public broadcaster, BETAR and All India Radio. The exchange programs will be broadcasted from both India and Bangladesh hourly.
Javadekar informed that the two sides have also agreed to scale up joint production and exchange of programs between the official broadcasters and Radio.
Javadekar's Bangladeshi counterpart Mahmud, in his inaugural speech, said that the relationship between New Delhi and Dhaka has reached new heights under the leadership of Prime Minister Narendra Modi and his Bangladeshi counterpart Sheikh Hasina.
"Without the support of India, the liberation of our country would never have been possible. Our relationship is historic. Under the leadership of Narendra Modi and Sheikh Hasina, the relationship has reached new heights," Mahmud said.
India has also extended its support to Bangladesh for the establishment of 'Bongobondhu Film City'. (ANI)