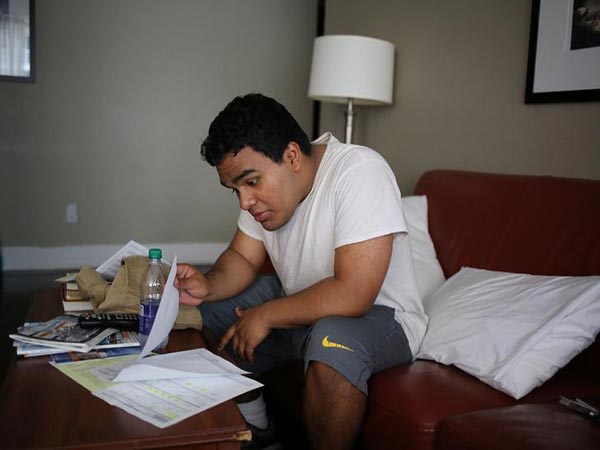 Abu Dhabi (UAE) Dec 27: An illegal recruitment agent, who allegedly duped three jobseekers and brought them to the UAE on visit visas, could end up in jail for seven years or more if proven guilty, Khaleej Times has learnt. Authorities have also confirmed that they are preparing for the agent's arrest.
Police authorities of the Indian state of Tripura recently launched an investigation into the incident, which involved an agent who reportedly took up to Rs130,000 (Dh6,800) from each of the three men and promised them UAE construction jobs that turned out to be a sham.
The trio ended up sleeping on the streets of Abu Dhabi as the agent abandoned them a month after their arrival in the UAE in September.
Jalsingh Meena of South Tripura police told Khaleej Times over the phone that a criminal case had been registered against the agent based on a complaint filed by the wife of one of the victims.
"It is a criminal offence, and they will be charged for cheating according to section 420 of the Indian Penal Code," said Meena. He added that more sections for conspiracy and other charges could be added as the investigation continued.
The accused could be fined and imprisoned for more than seven years according to the Indian penal code, he said.
"We have found the whereabouts of the agent. He is based in Chennai in Tamil Nadu. Our investigative team will soon be heading to Chennai to arrest the man," said Meena.
The police said they are waiting for the three victims to return from the UAE to get more information.
As Khaleej Times reported on December 19, the three men - a father and son and their friend - had approached the embassy, seeking help to return home "after going through hell".
"We used our life savings to pay for an employment visa in the UAE. It is only when we reached the airport that we realised we had been scammed. Instead of the promised employment visa, what we got in our hand was a one-month tourist visa," said Ajith Runjan Majumdar, 44. Majumdar's son, Abhijith Majumdar, 23, and his friend Dedasish Debmath, 26, were the other victims who fell into the 'employment trap'.
Smita Pant, deputy head of the mission, confirmed that the victims' return to India had already been arranged. "They will fly home on Thursday," Pant said.
Based on the complaints of the men, the embassy had passed on the information to police authorities in Tripura to bring the culprits to book, she said. "The local police authorities acted swiftly and launched an investigation."
Navdeep Singh Suri, Indian ambassador to the UAE, said the latest crackdown on illegal recruitment agents is an example that "the embassy's efforts to directly take up specific cases with state and district authorities are now producing results".
"Hope this will start producing a different effect, too," Suri said.
Pant said this is the fourth case where the embassy directly intervened and initiated investigations against unscrupulous agents."We hope this will deter other agents from cheating unsuspecting Indan jobseekers and women, who come to the UAE looking for better opportunities."
Source: Khaleej Times