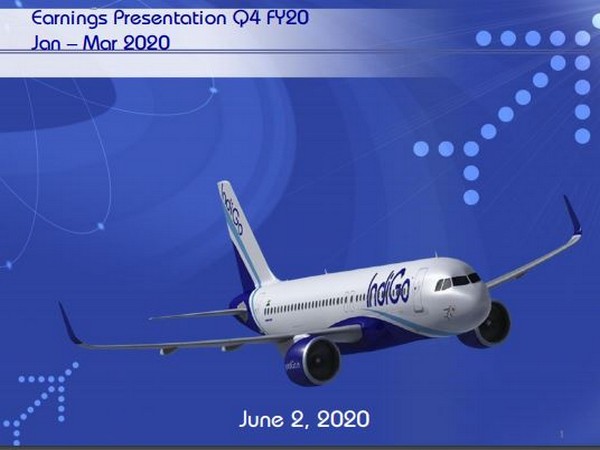 Gurugram (Haryana) [India], June 2 (ANI): InterGlobe Enterprises, the parent company of India's largest airline IndiGo, reported a net loss of Rs 871 crore on Tuesday due to closure of flight operations during the national lockdown on account of Covid-19.
It had posted a net profit of Rs 596 crore in the same period last year. However, the revenue from operations in Q4 FY20 marked an increase of 5.3 per cent to Rs 8,299 crore as compared to Rs 7,883 crore in Q4 FY19.
Total expenses for the quarter were Rs 9,924 crore, up 30 per cent over the same quarter last year.
Earnings before interest, taxes, depreciation, amortisation and restructuring or rent costs (EBITDAR) in Q4 FY20 was Rs 87 crore with a margin of 1 per cent as compared to EBITDAR of Rs 2,202 crore with a margin of 27.9 per cent for the same period last year.
"In the midst of every crisis, lies great opportunity. At IndiGo, we are determined to emerge from this crisis stronger and more energised than ever," said Chief Executive Officer Ronojoy Dutta.
"We are positioning ourselves to be a stronger brand, to have a more efficient fleet and a lower cost structure. We fully intend to deliver for India, the best air transportation system in the world," he said in a statement.
As on March 31, IndiGo had a total cash balance of Rs 20,377 crore comprising Rs 8,928 crore of free cash and Rs 11,449 crore of restricted cash. The capitalised operating lease liability was Rs 20,285 crore. The total debt (including the capitalised operating lease liability) was Rs 22,719 crore.
The airline has a fleet of 262 aircraft including 123 A320ceos, 100 A320neos, 14 A321neo and 25 ATRs.
During January to March, it operated a peak of 1,674 daily flights including international operations. Its service extends to 86 destinations including 24 international cities.
The carrier had technical dispatch reliability of 99.86 per cent, on-time performance of 80.8 per cent at the four key metros and flight cancellation rate of 1.96 per cent. (ANI)