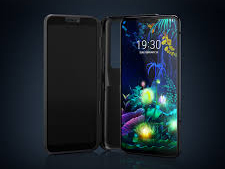 Seoul (South korea) May 18: LG Electronics Inc.'s first 5G smartphone, the V50 ThinQ, was well-received in its first week on sale in South Korea, thanks to carriers' high subsidies and promotional events, according to industry sources Saturday.
LG's V50 went on sale on May 10 priced at 1.2 million (US$1,000), becoming the second 5G smartphone in South Korea following the 5G version of Samsung's Galaxy S10 released last month.
Over 100,000 V50s were sold in the first eight days, about four times the initial sales of the V40, its predecessor launched in October, according to the data compiled by local carriers.
Industry officials partly attributed the robust performance to mobile carriers' heated competition to draw more 5G subscribers with hefty subsidies, which made the premium phone even cheaper than 4G phones in some cases.
Leading carrier SK Telecom Co. offered subsidies of up to 770,000 won for the V50, while KT Corp. and LG Uplus Corp. offered around 600,000 won, higher than the discounts for the Galaxy S10.
People who buy a V50 this month can also get a second screen accessory, useful for gaming and multitasking on dual screens.
Samsung had planned to launch a 5G-enabled foldable device to attract users with its innovative design, but it delayed the launch over durability issues with its screen.
"Carriers' competition to draw more 5G subscribers helped boost sales of V50s in the initial stage," an LG official said, asking to remain unnamed. "As a 5G smartphone is capable of multitasking, a detachable dual screen drew a positive response from customers."
LG Electronics has said it aims for a turnaround in its mobile business with its first 5G smartphone in major markets, including South Korea and the United States.
The company plans to launch the V50 with U.S. carrier Sprint in four American cities on May 31, following Samsung's launch of its 5G device on Thursday in selected cities.
Industry watchers say the U.S. 5G smartphone market could provide a turning point for South Korean handset makers this year, as Apple is expected to launch its own device next year and Huawei faces trouble in the U.S.
"It would be not easy to attract 5G smartphone users in the U.S. market in the initial stage as it takes more time to establish infrastructure with its vast land area," an industry official said. "But with the absence of 5G phones by Apple and Huawei for now, Samsung and LG are better positioned to expand their presence in the premium market this year."
According to IT industry tracker Counterpoint Research, Apple's iPhones accounted for 39 percent on the U.S. market in the first quarter, followed by Samsung with 28 percent and LG with 11 percent.
Source: Yonhap