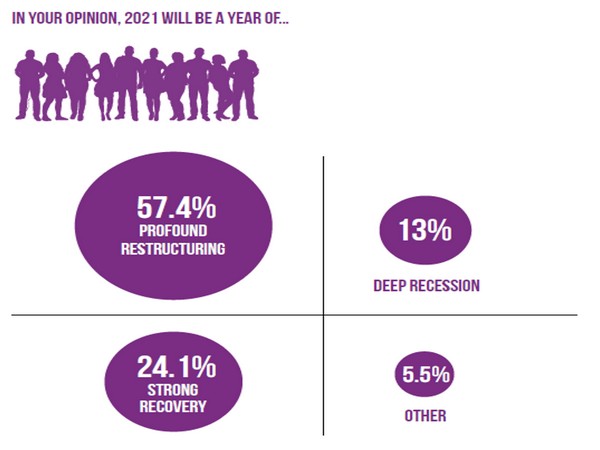 Mumbai (Maharashtra) [India], January 8 (ANI/NewsVoir): The year 2020 will go down in history as a year of unprecedented change - starting with nationwide lockdowns, economic turmoil, and a great deal of personal loss for many.
However, all change has not been adverse; the year has brought in a fair share of new prospects too. In the end of the year ISI Emerging Markets Group proudly launched yet another edition of its annual Foresight report. Foresight 2021: Game Over, Game On is focused on the new economic and social developments brought forth by the pandemic.
It explores not only risks, but also opportunities that transpire in such turbulent periods, and hence, provides a glimpse into what the future holds. The report also shares many interesting insights about the people's expectations for 2021.
India witnessed a historic decline in GDP, which was accompanied with quick and responsive changes by the government and the central bank. The GDP growth rate for the second quarter of India's fiscal year bore testament to the same. With two new vaccines on the brink of rollout, the country has much to be hopeful for in 2021.
India's pharmaceutical industry has been a rising star with a booming global presence and a strong footing in the global pharma supply and value chain. Home to the world's third largest pharma market by volume and the 14th biggest by value, India is the largest supplier of generic medicines globally and boasts a whopping share of over 50 per cent in the global supply of vaccines.
Unquestionably, India has been dubbed the Pharmacy of the World. The country is seeking to grow its presence and position itself as an alternative to China. The question is will India succeed, given its overdependence on Chinese raw materials? Read more from the report. India produces 60,000 generic drugs across 60 therapeutic categories and is the largest producer of generic medicines with a share of 20 per cent of total global production, meeting over 60 per cent of world's demand.
India's pharmaceutical exports grew more than three times over the past decade from USD 5.2bn in the fiscal year ending March 2010 to USD 16.3bn in FY2020. Still, the manufacturing of drugs in India is dependent on the imports of raw materials and active pharmaceutical ingredients (APIs). What is more, India imports 70 per cent of its APIs and intermediaries from China.
China is the world's largest producer of personal protective equipment (PPE). Initially, China imposed restrictions on PPE exports that were later lifted, but the country was not able to meet the sudden spike in global demand and on top of that it supplied poor quality and defective PPE to various countries. This revealed the weaknesses and vulnerabilities of the current global pharma supply chain and exposed the glaring necessity for an alternative to Chinese supplies. India has a chance to fill this void, however, there is a significant gap between this strategic goal and the realities of the pharma industry in the country.
The good news is that a lot of work is in progress to reduce the dependency on imports and to ensure the creation of large API clusters in India. In March 2020, the Indian government announced a USD 140mn package, involving support for three bulk drugs parks as well as the manufacturing of 53 priority APIs as part of the efforts to reduce dependency on imports. On the quality front, currently there exists a gap between the requirements of global regulatory agencies and those of domestic regulatory agencies. To tap into the opportunity of becoming a global pharma supplier, India must work on harmonizing these requirements.
How did India navigate through the COVID-19 crisis using its monetary and fiscal policy tools? What does China buy online? Government Interventions. De-globalization and the future of global supply chains. Of all the changes the pandemic has unleashed, three main themes have stood up: the accelerated adoption of digital technologies, the new role of the governments, and the future of global supply chains. The Foresight 2021 explores a slew of topics, out from the old and into the new. You can download the Foresight 2021 report from this link
.
ISI Emerging Markets Group incorporates CEIC and EMIS, renowned globally as leading providers of data, analysis and research for the world's fastest growing and highest potential countries. CEIC provides access to high-quality macroeconomic databases with the most complete set of 6.6mn time series covering more than 200 economies, 20 industries and 18 macroeconomic sectors - compiled from 2,200 sources worldwide. EMIS is one of the largest aggregators of information on 147 plus emerging countries in the world, covers over 8.5mn company profiles, 1,50,000 plus M&A/ECM deals and provides time-sensitive, hard-to-get, relevant 50,000 plus news articles every day, 3,80,000 plus research reports from 5,700 plus publications.


The Editorial team at ISI Emerging Markets publishes proprietary research reports, which analyze macroeconomic and industry developments in countries across the globe. With a primary focus and expertise on the world's emerging markets, ISI Editorial aims to identify market opportunities in large-potential economies and forecast upcoming trends.
This story is provided by NewsVoir. ANI will not be responsible in any way for the content of this article. (ANI/NewsVoir)