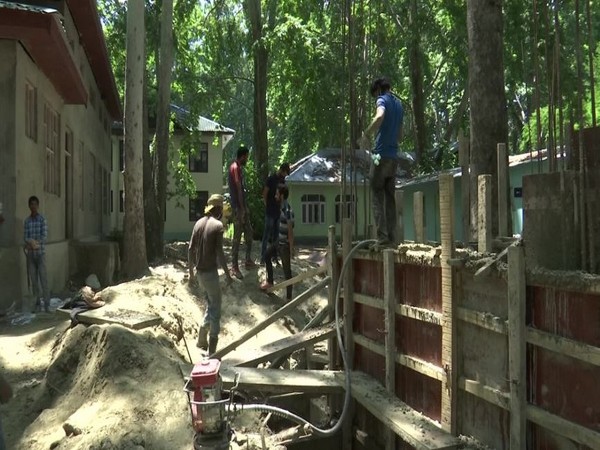 Ganderbal (Jammu and Kashmir) [India], July 24 (ANI): The construction for several new facilities at the Government Degree College in Ganderbal here began on Friday, as per the Jammu and Kashmir government.
According to the Deputy Commissioner of Ganderbal, Shafqat Iqbal, the ongoing construction includes many new projects like an auditorium, new classrooms, an additional modern library, a conference hall, a cultural hall and a debate hall.
"To boost the education sector in the Ganderbal district, construction has begun in full swing with the support and help of funds issued by the Central government. Earlier, we used to face a lot of problems with funding. But for the last year, ever since our state received the status of the Union Territory, development work has been fast-tracked," he said.
While appreciating the developmental projects being carried by the Centre, he added, "Students of the institution used to face many problems as they did not have the infrastructure to organise larger events and functions. Further, we did not have adequate accommodation for all the students. With these new facilities, we will be able to accommodate 100 more students, and the new batch will now be able to hold various college programmes and get quality education in a good atmosphere."
Iqbal further stated that the people are happy to have been able to start 'Back to Village' program last year. In the program, they analyse the reports from the visiting officers and identify the most important projects that would benefit the whole community, he said.
"Centre gave our district an addition five crore rupees for these public-oriented work. We have been further told that if we need more funds for these projects they will be allocated to us in the future. We are very glad to have so many ongoing centrally-sponsored schemes," Iqbal told ANI.
He also informed that the construction process of the new facility began last year but was not completed on time due to political unrest, heavy snowfall and the COVID-19 pandemic.
Momin Meraj, an ex-student of the college said that the new infrastructure would be very beneficial for the coming batches.
"I came to the college campus today to collect my passing certificate and was excited to see the changes. New buildings are being built everywhere and everything looks brand new. It used to be very difficult earlier and I'm glad that the new batch won't have to face the problems we faced," Meraj told ANI, praising the projects in the college that have been funded by the Centre.
According to Adnan Ahmad, a student at the Degree college in Ganderbal, the new infrastructure will be very beneficial for the learning process of the students.
"Good infrastructure is integral to a student's overall education. The new classrooms and the auditoriums will be very beneficial for both the students and the teachers. The digital classrooms will enable us to have much better classroom experience and we will allow us to learn in different ways. I hope to get a lot more exposure through the new infrastructure. We are also very excited about the new auditorium as we will be the first college in the town to have one," he told ANI.
August 5 will mark the one-year anniversary of the abrogation of Article 370, which gave special status to the erstwhile state of Jammu and Kashmir and bifurcated the region into two Union Territories- Jammu and Kashmir, and Ladakh. (ANI)