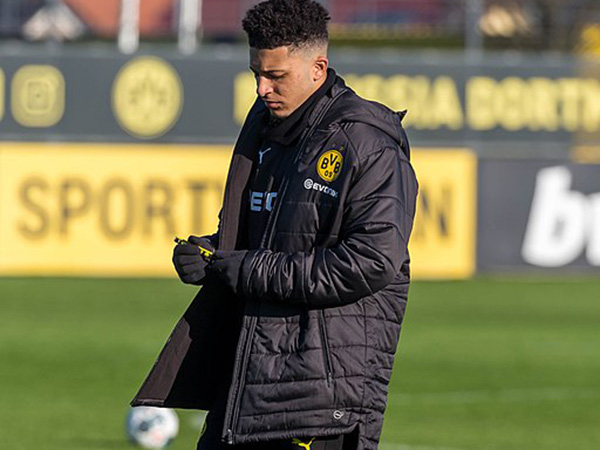 Washington DC (USA) June 1: England international Jadon Sancho celebrated the first of his second-half hat-trick for Borussia Dortmund in its 6-1 rout of SC Paderborn on Sunday by revealing a "Justice for George Floyd" T-shirt.
The victory against the Bundesliga bottom club kept Dortmund's slender title hopes alive, but it was Sancho's performance and his personal protest at the death of Floyd which proved the main talking point.
Dortmund was leading 1-0 through Thorgan Hazard when Sancho grabbed his first goal since the Bundesliga restart, quickly peeling off his team shirt to reveal the message, which earned him a yellow card from the referee.
His teammate Achraf Hakimi also pulled up his shirt to display an undershirt bearing the same words after scoring Dortmund's fourth.
They joined other Bundesliga stars protesting the death of Floyd, 46, who died in Minneapolis during an arrest by a police officer, who pinned him to the ground for several minutes by kneeling on his neck.
Earlier Sunday, French striker Marcus Thuram scored twice in Borussia Moenchengladbach's 4-1 win over Union Berlin and took to the knee in a tribute to the Black Lives Matter movement.
Saturday saw Schalke's US midfielder Weston McKennie sporting an armband bearing the words "Justice for George" during his side's home defeat to Werder Bremen.
The 20-year-old Sancho is among the hottest properties in world football, taking his tally to 17 goals and 16 assists for the season with his first senior hat-trick.
Dortmund was held 0-0 at halftime, but Hazard's goal broke the deadlock before Sancho set the match alight with Hakimi and Marcel Schmelzer also on the scoresheet.
The win leaves Dortmund still seven points adrift of leader Bayern Munich, 5-0 winners over Fortuna Dusseldorf Saturday, with five games to go, but a timely victory after losing 'Der Klassiker' to Bayern in midweek.
Borussia Moenchengladbach's 4-1 victory took them into third and the Champions League places.
Source: CNN News