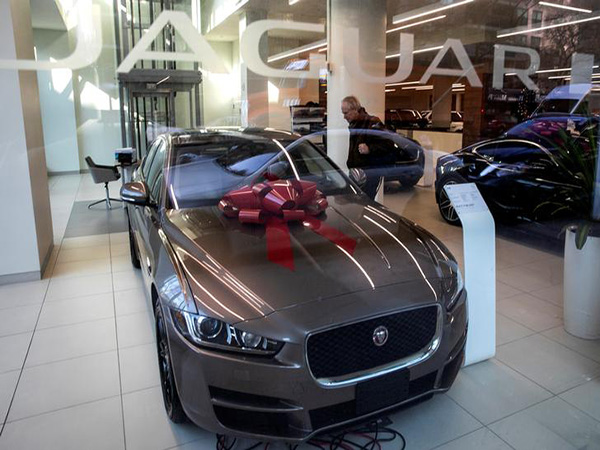 Washington DC (USA) Dec 04: Jaguar unveiled a new look for the company's sportiest model, the two-seat F-Type sports car, on Monday. The changes are subtle, but make the car look sleeker and smoother than before.
There are some engineering changes, too, giving some versions of the car a little more power and better handling.
The new 2021 model year F-Type has a wider grill that's set deeper into the body. Narrower headlights give it a more aggressive appearance and the body's sheet metal has a smoother, more flowing shape. In the rear, the taillights are also slimmer and, like the headlights, have a new signature light design.
Like the current version, the new F-Type will be available with a turbocharged four-cylinder engine, a supercharged V6 or a supercharged V8. (Turbochargers and superchargers work differently, but both force air into the engine to help it produce more power.) The four-cylinder engine produces 296 horsepower, while the new V8 will crank out 575 horsepower. In the current F-Type model, buyers have to opt for an ultra high performance F-Type SVR to get a 575 horsepower engine. The mid-range V6 engine produces up to 380 horsepower. Previously, buyers had to opt for a higher-performance version of the V6 to get that much power.
The suspension for the car has been retuned, according to Jaguar, and the steering has also been improved for better feel. The car comes equipped with wider tires for better cornering grip.
The F-Type is available in rear-wheel drive and all-wheel drive versions. There is no option for a manual transmission. Instead, all new F-Type models have an eight-speed automatic transmission, but drivers can change gears using the agear selector or using steering wheel-mounted paddles.
Pricing for the new F-Type has not yet been announced. Jaguar has also not said when production of the new car will begin. Prices for the current version start at a little over $60,000 in the United States for the four-cylinder model.
Source: CNN News