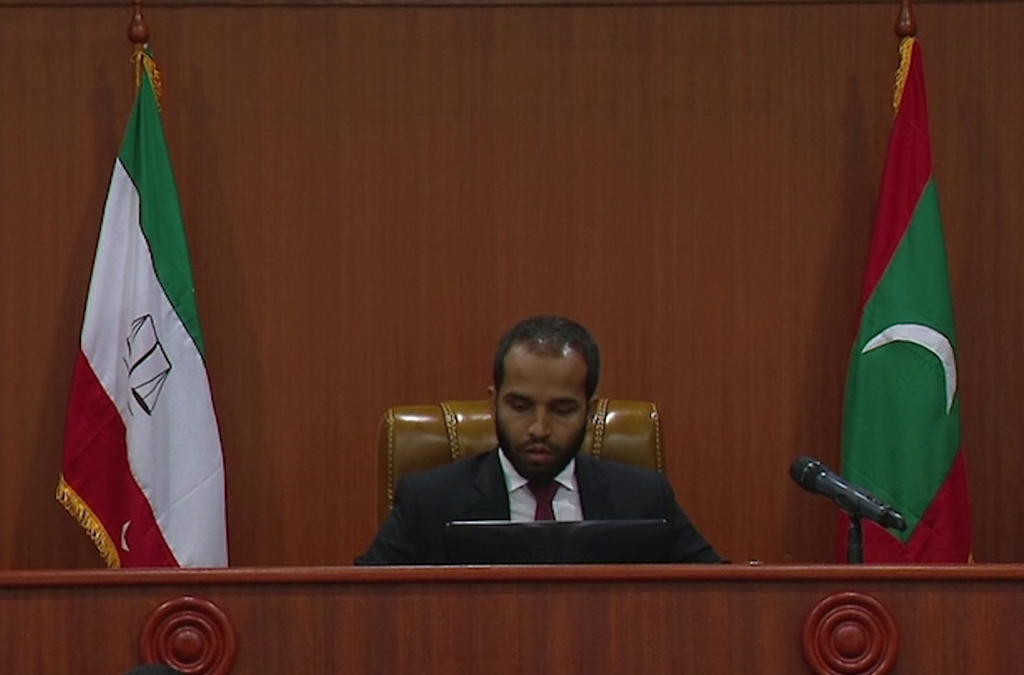 Male (Maldives) Nov 9: Senior government officials sought assurances that former president Abdulla Yameen will be convicted and sentenced to prison, Judge Ahmed Hailam alleged on Thursday.
Hours before he was due to deliver a verdict in the opposition leader's money laundering trial on Tuesday, the Judicial Service Commission suspended the criminal court's chief judge for sharing a cartoon of the president and speaker of parliament paraded in chains. On the following day, the watchdog launched a separate probe into a financial transaction of US$12,995 between Judge Hailam and former MP Alhan Fahmy in May.
In a press statement, Hailam accused the JSC of suspending him and tarnishing his reputation with bribery allegations for refusing to assure that Yameen would be found guilty. He apologised for sharing the cartoon on the criminal court's Viber group and insisted that he was unaware of the depictions of the president and speaker.
Since hearings began in July, government officials tried to directly and indirectly influence Yameen's money laundering trial, Hailam alleged. The efforts intensified last Sunday and Monday, he added.
"Persons in very high posts of the government requested assurance that Abdulla Yameen Abdul Gayoom will be sentenced to jail by directly messaging me, calling me and through people I know," he said, accusing the the unnamed officials of threatening to probe the financial transaction and suspend him.
According to Hailam, the police had decided not to investigate the bank transfer from Alhan after he explained how it was a legitimate transaction to a senior police officer. The close friendship with Alhan preceded his election to parliament in 2009, Hailam said, stressing that he was not presiding over any cases related to the former lawmaker.
Judge Ali Rasheed Hussain, who was appointed as acting chief judge after Hailam's suspension, would now be aware of the attempts to influence Yameen's trial, he said.
In the wake of the allegations, the opposition Progressive Coalition declared that Yameen could not get a fair trial under the current administration. Hailam's statement was proof of the government's attempts to unduly influence the judiciary, opposition leaders told the press on Thursday night. A panel of judges should hear Yameen's case and Hailam's allegations should be investigated, former MP Abdul Raheem Abdulla said.
Accompanied by former vice president Dr Mohamed Jameel Ahmed, opposition leaders also travelled to the neighbouring Sri Lanka to brief international media and diplomats based in Colombo about Yameen's trial.
On Friday, MP Hassan Latheef, chairman of the ruling Maldivian Democratic Party, urged the judge to reveal the identities of the government officials and lodge the case with the authorities.
"A person who sentenced politicians to jail on president Yameen's orders will feel today that others also will influence. Hailam expected President Solih to call him and request to jail Yameen. Neither the president nor this government will do that," tweeted Youth Minister Ahmed Mahloof.
"No one should consider that being in a particular post or a case emerging at a particular time is a reason for not taking action or holding to account," said MP Hisaan Hussain - who represents parliament on the 10-member oversight body for the judiciary - at a ceremony held on Thursday night to appoint new judges to the High Court bench.
Source: Maldives Independent