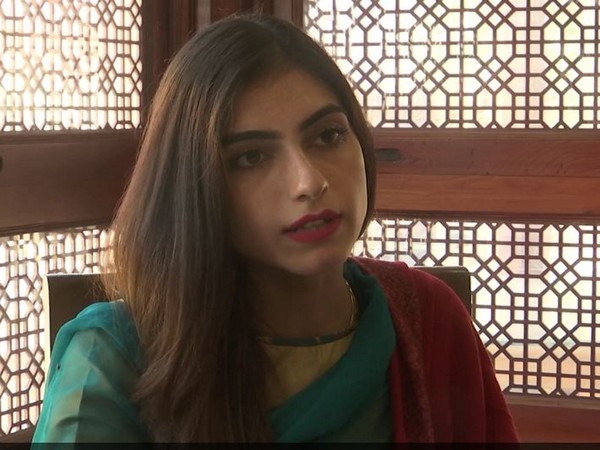 Srinagar (Jammu and Kashmir) [India], July 24 (ANI): Bollywood actor Farhana Bhat is a budding artiste who hails from the Kashmir Valley. She shot to fame from the 2018-film 'Laila Majnu', which was directed by Imtiaz Ali's brother Sajid Ali.
Farhana, who lives in the Chanpora area of Srinagar, studied at a local school and is currently pursuing a Bachelor's degree in Mass Communication and Journalism from Government College for Women, Srinagar.
"I didn't want to be an actor, but by God's grace, I landed in this field and got along with the flow. I have always been passionate about journalism and always wanted to become a journalist. I am also working on becoming a broadcast journalist or a news anchor. I will also go for an internship with a national TV channel soon," said Bhat.
It was six years ago when Farhana joined a local group of artistes and singers, and started working in musical shows and commercials. As luck would have it, she was called for an audition for one of the primary roles of the Bollywood film 'Laila Majnu' and got selected.
"In 2016, I had done a movie 'Sunshine Music Tour and Travels' in which I was part of the primary cast. That's how I started. After that, I gave many auditions and got selected for commercials as primary and secondary casts, and at times as a body double, too. When I auditioned for 'Laila Majnu', I bagged role of the lead actress' cousin named Jasmeet," Farhana said while peaking about her journey.
"I started as a junior actor in the background, after which I got offers for commercials, and my profile built gradually. In my journey, I met many people who discouraged me, but I had my family's support. I request parents to support their wards if they want to join the entertainment industry," she said.
Bhat said that the Kashmiri youth is extremely talented, but lack the right platform for showcasing its talent. She wants to provide budding singers and artists with a platform so that they are able to fulfil their dreams.
"My goal is to engage the youth in a positive way to give them some sort of a platform so that they are not discouraged. A lot of young girls message me expressing their desire to join the industry; I always encourage and help them," she said.
Speaking about her movie 'Laila Majnu', Bhat said that the movie, which was shot in the Valley, is her finest experience so far. "Apart from this, I have worked with local productions here, and I performed in the music video of leading Kashmiri singer Yawar Abdal recently. I have been cast in two more upcoming Bollywood movies. Acting is about hard work and your passion," she added.
And the young actor is making everyone proud- from friends and family to the people of Kashmir.
"She has the talent and potential to bring not just her but the Kashmiri youth's talent to the theatres. We just have two professions in our society --- engineering and medical --- everything else is considered a failure. But there are so many more fields, and the youth should be supported to join them," said Umar Nisar, Farhana's relative. (ANI)