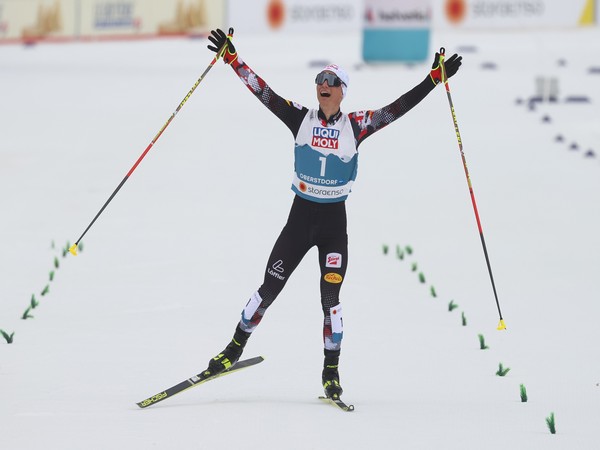 Berlin (Germany) Mar 5: Reigning FIS junior world champion Johannes Lamparter from Austria went up a level by claiming the men's large hill Individual Gudnersen title in dominant fashion at the FIS Nordic world ski championships in Oberstdorf, Germany on Thursday.
The 19-year-old finished the competition 37.1 seconds ahead of normal hill winner Jarl Magnus Riiber from Norway, and 45.8 seconds ahead of bronze medalistAkitoWatabe from Japan.
Lamparter impressed in the jumping round with a jump of 138 meters and 153.2 points, setting up a 22-second cushion going into the cross-country race.
Watabe claimed second with a jump of 137.5 meters and 147.6 points, which earned him a 15-second advantage over Riiber, who jumped 135 meters for 144 points.
After the skiing race started, Lamparter steadily began to pull away from his pursuers. His advantage of 23.4 seconds at the 2.5 km point swelled into 32.9 seconds at 5 km, 34.4 seconds at 7.5 km, and 37.1 seconds at the finish.
Watabe and Riiber skied together from the second lap onwards. Behind the top three, the gap to the pursuers did not fall below one minute from start to finish. Eric Frenzel of Germany claimed fourth place 1:57.7 behind Lamparter. He outsprinted teammate Fabian Riessle by 0.2 seconds. Finland's IlkkaHerola, the fastest athlete on the track, turned his 19th position after the jumping round into sixth place.
Men's team sprint large hill competition, the final event of Nordic Combined at this year's world championships, will take place on Saturday.
Source: Xinhua