Myanmar's economy - a kitten among tigers? 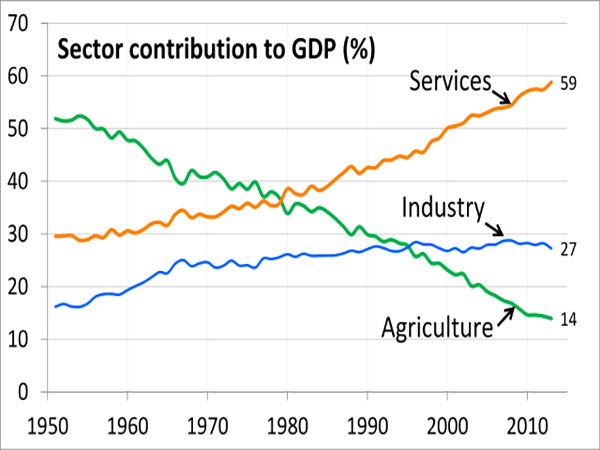 Naypyitaw (Myanmar) Nov 8: Back in the 1960s, Singapore, Taiwan, South Korea and Hong Kong were able use cheap labour and tax incentives to draw a huge influx of foreign direct investments and technological know-how from the west.
Between the early 60s and 90s, growth quickly soared, to an average of 10 percent at the peak, according to the World Bank, propelling those economies, now dubbed by some economists as the four Asian Tigers, from developing to developed, high-income nations by the early 21st century.
Then came the so-called Tiger Cubs, comprising the emerging Asean economies of Indonesia, Malaysia, the Philippines, Thailand and Vietnam, which benefited from trade and investment with the four Tigers since the 1980s.
Driven by e-commerce and digital technologies, Indonesia is among the fastest growing economies in the region, with total GDP of more than US$1 trillion. This is followed by the Thai and Malaysian economies, with total GDP exceeding US$500 million and US$350 million, respectively.
Vietnam, once among the least developed countries in the world, is now expanding at a rate of 6.5 pc per year. In fact, if its economy continues to grow at the current pace, Vietnam is poised to overtake Singapore in terms of GDP by 2029, according to Singapore economists Irvin Seah from DBS Bank and Maybank Kim Eng's Chua Hak Bin. But why is Myanmar, which is part of the Asean bloc, absent on the list of Tiger Cub economies? How is the country positioned against its neighbours?
To find answers, the Myanmar Times compared data on Myanmar and the other Tiger Cub economies. Here are four reasons why Myanmar still lags behind its neighbours:
Slow export growth
Over the past eight years, Myanmar's export volumes have increased by just US$8 billion and are currently still just a fraction of other economies in the region. According to 2017 data, Singapore exports totaled US$642.2 billion, while Vietnam exported US$230 billion worth of goods. In comparison, Myanmar's export revenue amounted to just US$15.6 billion that year.
For the period between October 1, 2018 and September 30, 2019, total trade volumes were almost US$35 billion, with exports valued at US$16.9 billion compared to imports of $18 billion, bringing the trade deficit to US$1.1 billion.
Inefficient collection of taxes
Myanmar collects the lowest amount of taxes among all the Asean countries. On the other hand, the government's expenditure has increased since 2017 and will continue to increase in the current fiscal year as Myanmar develops and races to prepare the necessary infrastructure that will draw foreign investors to the country, President U Win Myint said this year.
"We must spend the tax revenues well but in order to spend more the tax system must be effective. We must also be able to collect from those who are currently evading tax," said U Aung Ko Ko, a local economist.
Myanmar now runs a fiscal deficit that has over the past two years exceeded 5pc of GDP.
Low foreign reserves
Economists say the strength of a nation's economy can be measured by its foreign reserves, which should be enough to cover three months worth of a country's import volumes, according to the IMF's rule of thumb.
According to the Asia Development Bank, Myanmar foreign exchange reserves amounted to US$5.6billion in 2018. This aligns with the three-month rule. Since December, the Myanmar kyat has been stable at an average of K1522 per dollar and this has also allowed the central bank to gradually replenish the country's foreign exchange reserves, the World Bank said.
However, it is still just 65pc of the country's reserves in 2013. In fact, Myanmar is currently the country with the lowest level of foreign reserves among the Asean nations, lower than even Cambodia, the data showed.
Growth rate nothing to shout about
The Myanmar economy is forecast to continue growing in the coming years, with the latest and most bullish forecast set at 7.1pc in fiscal 2019-20, based on research by the ASEAN+3 Macroeconomic Research Office.
While this is an improvement from the 6.5pc growth for the country in 2018-19, World Bank data showed that other Asean countries are also growing at the same pace, with Cambodia, Laos, Vietnam and the Philippines growing at similar or faster rates.
And while Myanmar also improved its rank from 171 to 165 in the World Bank's Doing Business 2020 report, it is still ranked the lowest in Asean.
Although it is making progress, Myanmar still lags behind its Asean neighbours. For now, it is still a kitten compared to the Tiger Cub economies.
"Myanmar is still weak in liberalising the economy. It can be seen in the data and the ease of doing business ranking. Economic development in Myanmar will depend a lot on how quickly and effectively the country opens up to foreign investors," said U Tin Maung Than, a local economist.
Source: The Myanmar Times