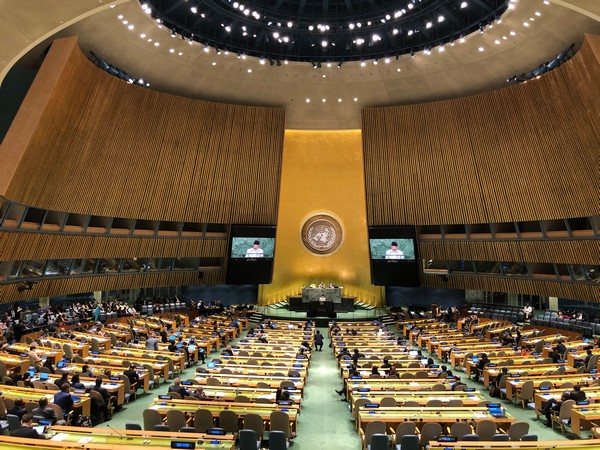 Lalitpur [Nepal], Sept 28 (ANI): On the last day of Climate Strike Week or the "Strike Friday" hundreds of Nepali students and activists took to the streets of Lalitpur as part of the Global Climate Strike that called for action to combat climate change and minimise its adverse impacts.
The protestors came on to the streets of Kathmandu, Lalitpur and Bhaktapur on Friday as part of the agitation.
This movement spearheaded by Swedish activist Greta Thunberg has now spread over to more than 150 countries and is supported by millions of people around the globe.
Nepal's Kathmandu Valley (Kathmandu, Bhaktapur and Lalitpur) saw at least four such events in various locations demanding the government to take the actions and raise concerns in International forum.
The placards and the displays carried on by the participants of the march called to save fast-melting glaciers and mountains which they claimed to be the identity of Nepal as "Himalayan Nation".
With global temperatures rising at a faster rate resulting in the rise of sea level and melting of ice in the High Himalayas and the Artic area.
Nepal's Foreign Minister Pradeep Gyawali, who attended the United Nations General Assembly in New York also raised the issue during his address on Friday.
"The most vulnerable countries are hit hardest by the impacts of climate change' and despite their negligible emissions, they face the consequences that are not just disproportionate but also unjust and undue," Foreign Affairs Minister of Nepal told during the address.
Foreign Minister further highlighted that Nepal lies in the hotspot of climate change and said that the Himalayas will see melting away of one-third of the glaciers and drying up of freshwater at an unprecedented pace.
The Minister also informed the Assembly about the Government's decision to convene a global dialogue, namely, 'Sagarmatha Dialogue', to deliberate on critical issues facing the world, including climate change. (ANI)