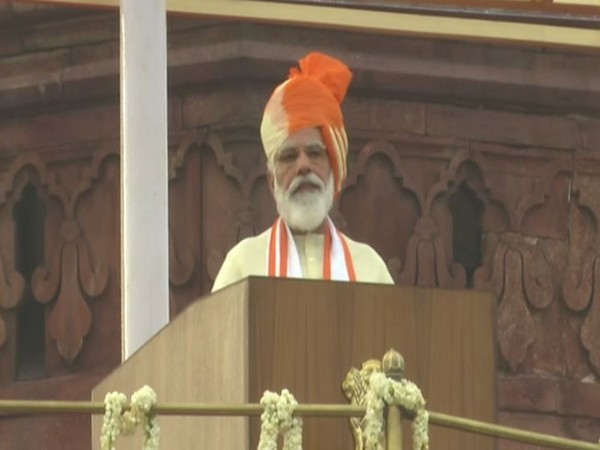 Dubai, [UAE], August 20 (ANI): The speech by Prime Minister Narendra Modi on 74th Independence Day came with the credibility of six previous speeches, in which all promises made by him have been kept, reports Gulf News.
Prime Minister Modi made many "game-changing promises" in this year's speech. Few of these standouts writes CEO of BlueKraft Digital Foundation, Akhilesh Mishra, in Gulf News.
"...This speech came with the credibility of six previous speeches in which all promises made by him have been kept. As an example, in 2014, in the very first speech, Prime Minister Modi promised a bank account for every Indian. Then only 58 per cent of Indians had it. Now everyone has it with almost 400 million new accounts opened," he writes.
"In the 2015 speech, the promise was to electrify every village in India. That was done ahead of schedule and then every household was electrified too. In 2016 the new target was set to make every home in India smoke-free and to make available health insurance to every poor in India," he further writes.
Mishra says that mention to LAC (Line of Actual Control) in the Prime Minister's speech was a direct reference to China, a first from the Red Fort.
"The import of the unambiguous assertion against expansionist forces would be unmistakably heard in all national capitals in the region," he says.
"It is the background of this credibility, earned through delivery, that Prime Minister Modi made many game-changing promises in this years' speech. Few of these stand out. Like the promise to connect every village of India by high-speed broadband fibre," he further writes.
Praising the announcement of National infrastructure Mission, Mishra says that this will provide immense opportunities for both domestic as well as foreign infrastructure players, especially from friendly countries.
The "unshackling" of India's agriculture sector and allowing of private enterprise to bloom without restrictions may turn out to be the most significant agricultural disruption in the world in the coming years, Mishra adds.
Mishra is of the view that the Prime Minister's Modi's pivot on foreign policy was both refreshingly new as well as paradigm defining.
PM Modi redefined the concept of neighbours to not just mean geographical neighbours but also included in the ambit the philosophy of extended neighbourhood, he adds.
"The new era of friendship that India and countries of West Asia, including and especially UAE, have seen in recent years is only a precursor to the immense opportunities that exist in such areas as trade, cultural ties, investment opportunities and tourism that will now be even more open with this new paradigm," Mishra opines.
"In a sense, this week represents the coming out of a New India, one which is ready to lead the economic revival in the post COVID world," he concludes. (ANI)