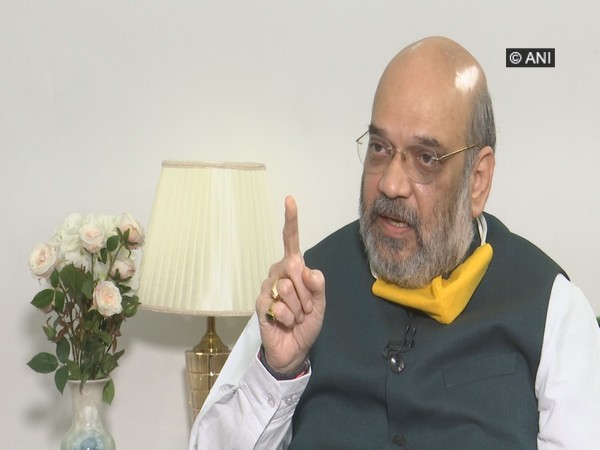 By Smita Prakash
New Delhi [India], June 28 (ANI): Union Home Minister Amit Shah has accused Congress leader Rahul Gandhi of doing "ochhi rajniti" (shallow minded politics) and making remarks "liked by" China and Pakistan during border tensions with China and asserted that the government was prepared for a debate in Parliament in which "1962 se aaj tak do-do haath ho jayein" (let us discuss from 1962 war onwards till now, ready for robust debate).
In an interview with ANI, Home Minister Amit Shah said Rahul Gandhi should introspect that his hashtag of 'Surender Modi' is being encouraged by Pakistan and China.
He said that the government was fully capable of handling anti-India propaganda but it was painful when a former President of such a big political party indulges in shallow minded politics at a time of crisis.
"Yes we are fully capable of handling anti-India propaganda but it does pain when a former President of such a big political party does "ochi rajiniti (shallow minded politics) at a time of problems. It is a matter of self-introspection for him and Congress that his hashtag is being taken forward by Pakistan and China. It is not for me. It is a matter of concern for Congress that hashtag of their leader is being encouraged by Pakistan and China. You say what China and Pakistan like. And at this time of crisis," added Amit Shah.
He was asked about a hashtag going viral last week about `Surender Modi' remarks of Gandhi and it gaining traction in China and Pakistan.
Sidestepping a pointed question asked by ANI, if at present there were Chinese troops on Indian soil, Home Minister Amit Shah said that it was not the appropriate time to comment on the situation at the LAC and that "briefings were on going and if the need arose, he would answer." The Minister added that he wished to limit the scope of this interview to Delhi's battle with Covid, wherein measures taken by Centre and Delhi Government were highlighted to ease any "panic" that could have risen in the city due to rise in cases.
Amit Shah, however, responded to tweets made by Rahul Gandhi that were critical of the Government's response to the situation at the LAC with China.
"Parliament honi hai, charcha karni hai to aaiye, karenge. 1962 se aaj tak do-do haath ho jayein. Koi nahi darta charcha se. Jab jawan sangharsh kar rahe hain, sarkar thos kadam utha rahi hai,uss waqt Pak aur China ko khushi ho aisi statements nahi deni chahiye." (There will be parliament (session). If you want to discuss, we will. Let all be discussed from 1962 to today. No one is afraid of discussion. But when the soldiers of the country are making efforts, the government is taking solid steps after taking a stand. At that time, making statements that please Pakistan and China, this should not be done)," he said.
Asked about Congress accusing BJP of lack of democracy over its attack on the party on Emergency, Amit Shah asked if there has been any Congress president from outside Gandhi family after Indira Gandhi and asked what democracy does Congress talk of.
"Democracy is a very comprehensive word. Discipline and independence also have their value. Beyond all this, I want to say one thing. I want to ask you. After Advaniji, Rajnathji, Nitinji, Rajnathji again, I became (party president) and now Naddaji. Is there a member of the same family? After Indiraji, tell me a Congress President who is outside the Gandhi family. What democracy they talk about?" said Shah.
"I did not do any politics during COVID. You look at my tweets of the past 10 years. Every June 25, I give a statement. Emergency should be remembered by people as it attacked the roots of our democracy. People should never forget. No political worker, citizen should forget. There should be awareness about it. It is not about a party but about the attack that took place on country's democracy. The language and form changes according to the context," he said.
Rahul Gandhi has been repeatedly targeting the government over the stand-off with China even as most other her opposition parties have backed the government's stance in the face-off with China in Eastern Ladakh.
On Friday, Gandhi posted a video and said Prime Minister Narendra Modi should tell "the truth" as several accounts were saying that China has made incursions in Eastern Ladakh.
In his tweets, Gandhi has accused Prime Minister of "publicly supporting" China's claim, termed him as "Surender Modi" and alleged that "PM has surrendered Indian territory to Chinese aggression".
Gandhi has also repeated his allegation that Indian soldiers were without weapons during the violent face-off with China on June 15-16 though External Affairs Minister S Jaishankar had made it clear that all troops on border duty "always carry arms, especially when leaving post and those at Galwan on 15 June did so too."
NCP leader and former Defence Minister Sharad Pawar has also differed with Gandhi on the matter. Pawar, an ally of the Congress in Maharashtra, said at the all-party meeting convened earlier this month by the Prime Minister that issues whether soldiers carried arms or not are decided by international agreements and "we need to respect such sensitive matters".
The all-party meeting was convened by the Prime Minister to discuss the situation in India-China border areas.
India had said earlier this week that deployment of a large number of troops by China and changes in behaviour along the Line of Actual Control (LAC) has also been aggravated by unjustified and untenable claims and a continuation of the current situation would only vitiate the atmosphere for the development of bilateral relationship. (ANI)