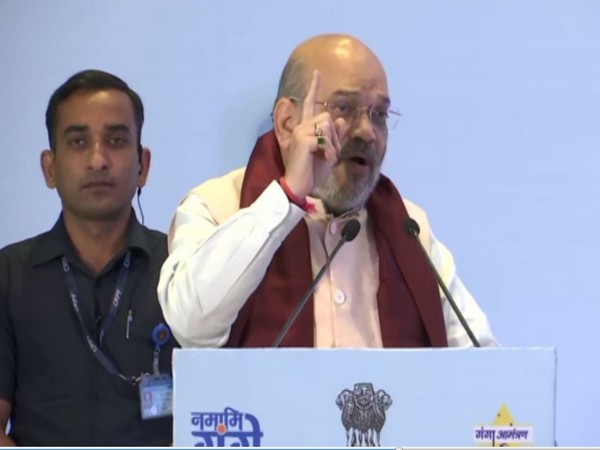 New Delhi [India], Mar 13 (ANI): Union Home Minister Amit Shah on Friday said that the Congress governments had spent just Rs 4000 crore from 1985 to 2014 for cleaning the river Ganga but to no avail, while the Prime Minister Narendra Modi government has sanctioned Rs 20,000 crore between 2015-2020 under Namami Gange Programme. He said that the quality of Ganga water has shown a remarkable improvement.
Speaking at "Ganga Aamantaran Abhiyan" organised by National Mission for Clean Ganga (NMCG), Shah said: "Congress had ignored the Ganga river. From 1985 to 2014, the Government had spent just Rs 4000 crore but nobody knows about the results. From 2015 to 2020, the Modi government has sanctioned Rs 20,000 core and started Namami Gange Abhiyan. In Ganga basin, Centre and state together flagged off 310 projects worth Rs. 28, 790 crores,116 projects have been completed and rest are running smoothly and will be completed soon".
"In 2014, when we were elected to power, we started Namami Gange to control pollution in the river, maintain its sanctity, ensuring its continuous flow, developing the river as a national waterway. In just five years, Samples from different locations of the river show that Namami Gange Abhiyan succeeds in improving the quality of water in Ganga. People became aware of Ganga's sanctity," he added.
He said that the main aim of Namami Gange is to produce cultural awakening among teenagers with respect to river Ganga.
"The main aim of Namami Ganga is in developing thought in teenagers, an awakening that they should respect the Ganga river and strive to maintain the sanctity and purity of its water," he said (ANI)