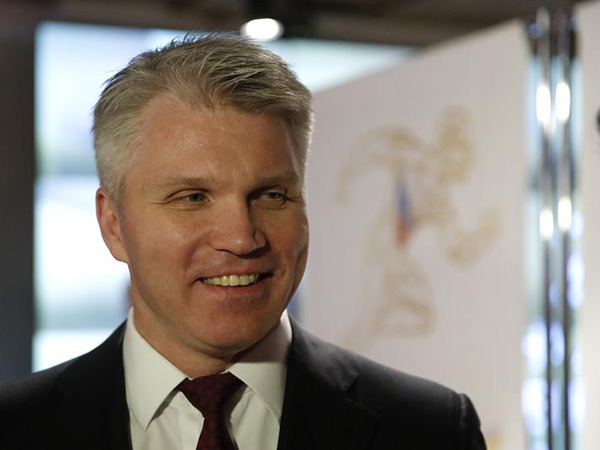 Moscow (Russia) Dec 01: The national team of Russia should get through to playoffs at UEFA Euro 2020 in spite of its opponents' expertise, Russian Sports Minister Pavel Kolobkov told TASS on Saturday.
Earlier in the day, Bucharest hosted the draw for the UEFA EURO 2020 final tournament. Russia is in Group B with Belgium, Denmark and Finland.
"In my opinion, this draw has not decided much, in principle. And the fact that Finland became our final opponent means that this team should be overcome," Kolobkov said. "We need to qualify and move on. Moreover, this game, along with a match against Belgium, takes place in St. Petersburg."
On June 13, the national team of Russia will meet Belgium in St. Petersburg. On June 17, Russia will play Finland in the same city. On June 22, Russia's football squad will go to Copenhagen to clash with Denmark.
The Final Draw for the 2020 UEFA Euro Cup was held on November 30 in the Romanian capital of Bucharest. A total of 24 national football teams, which have cleared the qualifications round, were divided into six groups with four teams in each.
Having been placed in Group I during the qualifications stage for the 2020 UEFA Euro Cup the Russian national football team played its matches to finish in second place after Belgium and qualified for the major European football championship.
Russia played 10 international fixtures this year and they were all qualifiers for the 2020 UEFA Euro Cup - in March, Russia lost to Belgium 1-3 and defeated Kazakhstan 4-0; in June, Russia beat San Marino and Cyprus (9-0 and 1-0 respectively); in September, the team routed Scotland (2-1) and Kazakhstan (1-0); in October the Russian footballers blanked Scotland 4-0 and then blazed past Cyprus 5-0.
Playing two international fixtures this month, the Russian team lost again to Belgium 1-4 playing at home and then enjoyed a confident 5-0 away win over San Marino.
The matches of the 2020 Euro Cup will be held at stadiums in 12 different cities across Europe, namely in London (England), Munich (Germany), Rome (Italy), Baku (Azerbaijan), Saint Petersburg (Russia), Bucharest (Romania), Amsterdam (The Netherlands), Dublin (Ireland), Bilbao (Spain), Budapest (Hungary), Glasgow (Scotland) and Copenhagen (Denmark).
St. Petersburg was granted the right to host three group stage matches and one of the quarterfinals of the 2020 UEFA Euro Cup. The newly-built football arena in St. Petersburg hosted the opening and final matches of the 2017 FIFA Confederations Cup and also served as one of 12 stadiums across the country hosting matches of the 2018 FIFA World Cup.
A decision to hold the 2020 Euro Cup, which will be celebrating its 60th anniversary that year, in various European countries instead of in one or two hosting countries was made at the UEFA Executive Committee's meeting in Lausanne, Switzerland, on December 6, 2012.
Source: TASS