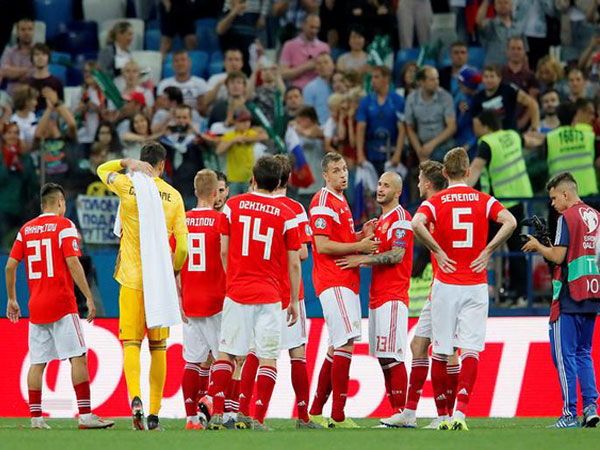 Moscow (Russia) Dec 01: Russia's national football team will a play friendly game against Poland as part of its preparations for UEFA Euro-2020, Polish Football Association General Secretary Maciej Sawicki said in a Twitter post.
"Our team's friendly games have been confirmed: Poland-Ukraine on March 31 and Poland-Russia on June 2," he said.
Meanwhile, the Russian Football Union (RFU) President Alexander Dyukov said on Saturday the Russian team will play a friendly match against one of the top 16 national teams by FIFA in the run-up to the European tournament.
"We have already started negotiations and reached some agreements, but we the teams with whom we are to play in March and late May-early June will be announced some time later," he said. "This includes strong teams that are included into the top 16 [by FIFA]," he said.
On November 18, the press service of Moldova's football federation said the national team would face Russia in a friendly game in Chisinau on March 31, 2020. The Russian Football Union did not confirm the information.
The Final Draw for the 2020 UEFA Euro Cup was held on November 30 in the Romanian capital of Bucharest. A total of 24 national football teams, which have cleared the qualifications round, were divided into six groups with four teams in each. Russia was placed in Group B, and will play against with Belgium (St. Petersburg, June 13), Finland (St. Petersburg, June 17) and Denmark (Copenhagen, June 22).
The matches of the 2020 Euro Cup will be held at stadiums in 12 different cities across Europe, namely in London (England), Munich (Germany), Rome (Italy), Baku (Azerbaijan), Saint Petersburg (Russia), Bucharest (Romania), Amsterdam (The Netherlands), Dublin (Ireland), Bilbao (Spain), Budapest (Hungary), Glasgow (Scotland) and Copenhagen (Denmark) between June 12 and July 12, 2020.
Source: TASS