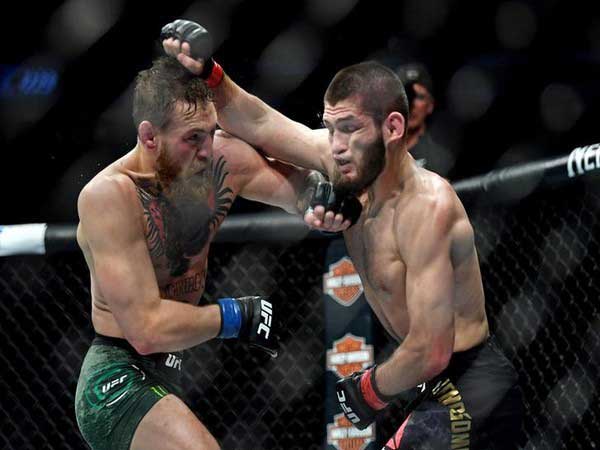 Moscow (Russia) July 30: Russia's UFC Reigning Lightweight Champion Khabib Nurmagomedov is set to face in April next year Georges St-Pierre of Canada, the Russian fighter announced Wednesday in his comment on the Instagram page of UFC (the Ultimate Fighting Championship) commentator Joe Rogan.
"Justin [Gaethje] in October; [Georges] St-Pierre in April," Nurmagomedov wrote in his comment on Joe Rogan's Instagram page.
In October 2019, Nurmagomedov stated that he viewed Canada's Georges St-Peirre as an opponent for one of his fights in the future. Georges 'Rush' St-Pierre, 39, boasts a record of 26 wins (eight by KOs, six by submission and 12 by decision) and two defeats.
Nurmagomedov's team announced earlier in the year that Khabib was scheduled to face Interim Lightweight Champion Justin Gaethje of the United States on October 24.
The Russian fighter's team signed a contract last November for Khabib to face American Tony Ferguson at a UFC event in Brooklyn, New York, on April 18, 2020, in Barclays Center. New York Mayor Bill de Blasio announced in early March the state of emergency in response to the novel coronavirus pandemic, which included the cancellation and postponement of various sports events, and the fight between Nurmagomedov and Ferguson was called off as well.
In March, UFC President Dana White announced that the Russian fighter would be substituted in the fight against Ferguson by Justin 'The Highlight' Gaethje, 31, who has a record of 22 wins (19 by KO/TKO, one by submission and two by decision) and two defeats. White also said that Nurmagomedov would retain his champion's belt and the Ferguson-Gaethje fight would be "for the interim lightweight belt."
On May 9, Gaethje booked a fifth-round TKO win over Tony Ferguson of the United States at the UFC-249 event.
UFC Reigning Champ Nurmagomedov
In early September last year, Nurmagomedov defended his UFC champion's belt for the second time in a title unification bout in Abu Dhabi against Dustin Poirier of the United States. The Russian defeated his US opponent with a choke in Round 3.
The 31-year-old Russian fighter, nicknamed 'The Eagle,' currently holds an unblemished record of 28 wins in all of his mixed martial arts fights (8 by KOs, 10 by submission and 10 by decision).
Khabib Nurmagomedov, hailing from Russia's North Caucasus Region of Dagestan, was the first Russian to win the UFC champion title during the fight against his US opponent Al Iaquinta in the spring of 2018.
On April 8, 2018, Nurmagomedov defeated Al Iaquinta in a five-round fight for the Ultimate Fighting Championship (UFC) lightweight belt in New York.
At the UFC 229 tournament in Las Vegas in October 2018, Nurmagomedov defended his champion's title in the fight against Conor McGregor, a renowned Irish professional mixed martial arts fighter and boxer.
Source: TASS