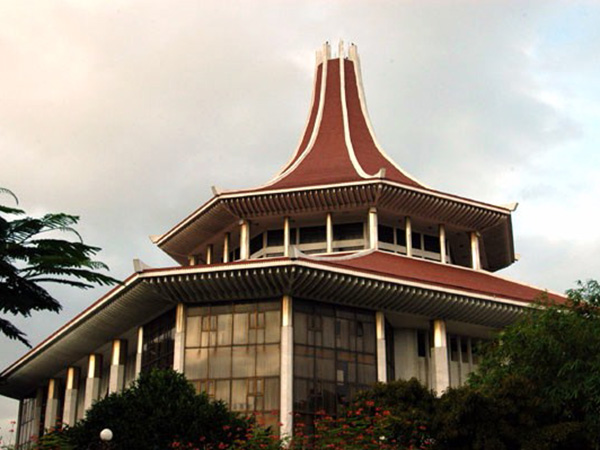 Colombo (Sri Lanka) June 3: Sri Lanka's Supreme Court today dismissed all Fundamental Rights petitions filed challenging the gazette notifications issued by the President to dissolve the Parliament and by the Election Commission to hold election later this month.
After listening to arguments from both sides for 10 days, a five-member Bench of the Supreme Court made the decision today to deny granting leave to proceed seven petitions filed seeking to annul the President's order to dissolve the parliament and the Election Commission's decision to hold elections on June 20.
The Bench comprising Chief Justice Jayantha Jayasuriya, Justices Buwaneka Aluvihare, Sisira de Abrew, Priyantha Jayawardena and Vijith Malalgoda unanimously made the decision.
Releasing the decision, the Chief Justice stated that the decision was reached with the majority of judges agreeing on the initial objections raised by the respondent party regarding the petitions.
Seven petitions were filed by Attorney-At-Law Charitha Gunaratne, Dr. Paikiasothy Saravanamuttu of the Centre for Policy Alternatives (CPA), journalist Victor Ivan along with seven others, Ranjith Madduma Bandara of the Samagi Jana Balawegaya, Sri Lanka Muslim Congress and former MPs Kumara Welgama and Patali Champika Ranawaka.
The petitioners have named the Attorney General on behalf of the President, Chairman of the Election Commission Mahinda Deshapriya and its members NJ Abeysekara and Ratnajeevan Hoole and the Attorney General as respondents.
Interim petitions were filed by 15 parties including Ven. Muruththettuwe Ananda Thero, Ven. Atapattukande Ananda Thero, Dr. Gunadasa Amarasekara and Attorney-at-Law Premanath Dolawatte.
The Supreme Court concluded the hearing on the fundamental rights petitions yesterday and announced the decision would be given today.
The petitions stated that the Constitution provides a mandatory time limit of three months for a new parliament to meet from the date of dissolution of Parliament. Accordingly, the President issued a gazette notification dissolving the Parliament on the 2nd of March and the General Election was set for 25th of April.
The Election Commission has decided to postpone the general election until the 20th of June, due to the inability to hold the election on April 25 amid the prevailing COVID-19 pandemic.
Petitioners said holding an election on June 20 is contrary to the provisions of the Constitution and the gazette notification issued by the President dissolving Parliament will be invalid as a new parliament cannot be convened within three months of the dissolution of Parliament.
Furthermore, the Petitioners have observed that it is impossible to hold a free and fair election in the context of the Covid-19 crisis as the epidemic has not been controlled yet. The health risk would seriously impede campaigning efforts and voter turn outs, which are essential for a free and fair election.
The petitioners in their petition, sought the apex court to issue a decree that fundamental rights of the people are violated by holding an election before the end of the Coronavirus epidemic.
Source: Colombo Page