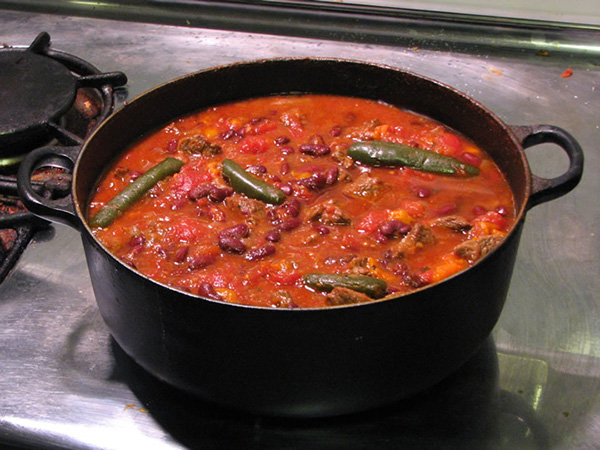 Islamabad (Pakistan) Dec 4: It will probably take longer to read this article than it will to start a pot of soul-satisfying chilli bubbling on the stove.
With preparation time all of 10 minutes, this hot and spicy stew consisting primarily of beans, tomatoes and ground beef is a quick and easy way to get out of the kitchen as chilly weather approaches.
The simplified version of a classic recipe provided below is tried, tested, and true. It fed six adults with hearty appetites on a cold and windy Sunday night, and there was still much left over for lunch the following day.
Even the one who distrusted a meal without carbs - potatoes, bread, spaghetti or roti - declared himself to be stuffed.
The protein-packed beans proved to be incredibly filling, while heat from the chilli powder helped to clear sinuses and warm the body up considerably.
When my parents heard the details of this culinary venture over a long-distance phone call they remained unconvinced - she would not accept that a zucchini could be among the ingredients, while he dismissed the whole thing for being "cowboy food."
Both, however, looked forward to sampling some at the earliest opportunity.
While still standing by the zucchini (for added texture and nutrition), it is true that during the 1850s, this Mexican-inspired thick and spicy mixture was dried in the shape of bricks, ready to be simmered in a pot of hot water by those riding horseback on the trails.
Soon it became the official dish of the state of Texas and one of the highlights of its celebrated Tex-Mex cuisine. The first of many chilli parlours sprang up in San Antonio and soon spread across the Midwestern states, each one claiming to have created a distinct version, some offering spaghetti or rice to accompany their version.
Chilli is flexible. Add more or less of any of the vegetables or beans. If you add more veggies you may also want to add more spice, but not too much because, remember, that chilli powder heats up considerably as it cooks!
The salt from the accompanying tortilla chips will help to balance out that heat on the palate. You can choose to keep the mixture thick or add more water for a slightly thinner consistency. Top it with shredded cheddar, chopped cilantro and chunks of avocado - or not.
The classic recipe is scrumptious on its own. The chicken version is equally delicious with the benefit of being lower in fat and cholesterol, while the vegetarian version hides vegetables so well that reluctant kids and adults won't even miss the meat.
EASY BEEF CHILLI
INGREDIENTS
2 pounds ground beef
1 onion, chopped
1 small green bell pepper, chopped
1 medium zucchini, chopped
2 cloves of garlic, chopped
3 (16-ounce) cans red kidney beans, rinsed and drained
3 (14-ounce) cans diced tomatoes
2 (11-ounce) cans corn kernels
2 to 3 (levelled) tablespoons chilli powder
1 teaspoon salt
1 teaspoon ground black pepper
1 teaspoon ground cumin
METHOD
Saute onion, green pepper, zucchini, and garlic in a large pot on medium heat until tender, stir in beef and cook until it is no longer pink.
Add all the seasonings and cook for a couple minutes before adding beans, tomatoes, corn, and one cup of water.
Bring the mixture to a boil, then reduce the heat to very low, cover with lid and let it slowly simmer for two hours.
Stir occasionally, then serve with tortilla chips.
CHICKEN CHILLI
INGREDIENTS
4 chicken breast halves
1 jar salsa
1 (16 ounce) can crushed tomatoes
1 (16-ounce) can red kidney beans, drained and rinsed
1 (11-ounce) can corn kernels
2 teaspoons garlic powder
1 teaspoon ground cumin
1 teaspoon chilli powder
1 teaspoon ground black pepper
1 teaspoon salt
METHOD
Lightly brown the four chicken breasts (both sides) in one tablespoon of oil.
Add salsa, tomatoes, garlic powder, ground cumin, chilli powder, salt, and pepper then cook covered on low heat for one hour.
Shred chicken with two forks, then return the meat to pot, stir in corn and beans, and continue cooking covered on low heat for one more hour.
Serve with grated cheddar cheese, chopped cilantro, and green onions.
VEGETARIAN CHILLI
INGREDIENTS
2 tablespoons oil
1 large onion, diced
2 green peppers, diced
2 carrots, diced
3 stalks of celery, diced
4 cloves of garlic, finely minced
1 tablespoon chilli powder
2 tablespoons cumin
1 teaspoon oregano
1 teaspoon salt
1 teaspoon chilli flakes
2 (28-ounce) cans crushed tomatoes
2 cans beans, drained and rinsed
2 (11-ounce) cans corn kernels
METHOD
Heat oil in a large pot, add onion, and saute for about three minutes.
Add garlic and saute one minute more.
Add spices and cook stirring for about 30 seconds.
Add peppers, carrots, and celery and cook for about five minutes, or until they just start to soften.
Add tomatoes, beans, and corn then bring to a boil.
Once the chilli begins to bubble, reduce to low heat and let it simmer with the lid on.
Serve the chilli on its own or with sour cream, cheddar cheese, cilantro, diced avocados, green onions and flour tortillas.
Source: Dawn