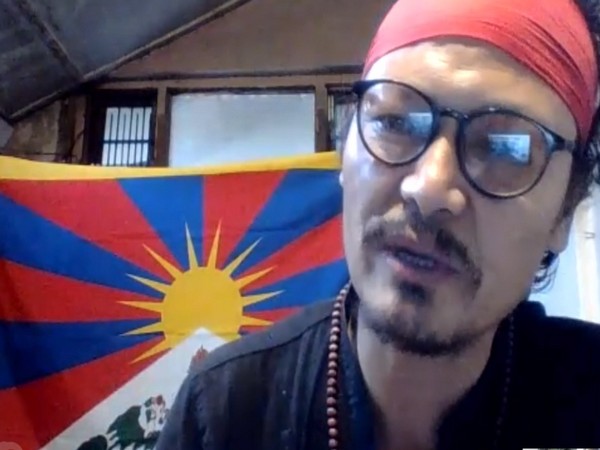 Dharamshala [Himachal Pradesh] India, June 25 (ANI): Amid simmering tension between India and China following the recent face-off at Galwan Valley in Ladakh, a noted Tibetan author and activist has said that India's boundary with China will be secured after Tibet's independence.
While speaking to ANI, Tenzin Tsundue also said that India required changing its outlook and policy vis-a-vis Beijing as the latter couldn't be trusted with its words.
He said that Tibetans had understood the diabolic designs of China and it was time for New Delhi to reconsider its stand on 'One China Policy' as Beijing had totally disregarded the territorial integrity of India.
"We, Tibetans, have been telling Indians that Tibet's independence is India's security but India's calculations have been different. India's policy has been One India policy, One China policy. However, China's border intrusions question India's territorial integrity and when China doesn't care about One-India policy then why should we care about One China policy?" said Tsundue.
"Tibetans and Indians can come together and put up a united fight against China. We can boycott China's goods. We can fight them politically, financially. We can start creating more industries so that we do not remain dependent on China." said the Tibetan author and activist.
"There was a time when we lived in Tibet and we were ignorant, not knowing China's politics and its designs but today we know it. And now it has become my double responsibility. China has not only occupied Tibet for the past seventy years but it is now intruding India, which is my second home. So I have a double responsibility against China," Tsundue added.
While speaking against the expansionist agenda of China, Tsundue said that China had been tactically securing control over the large landmasses of other countries and it had deceived them during the de-escalation exercises and peace agreements.
"What they do is that they take two steps forward and then they face a confrontation. And then they try to de-escalate at the point of confrontation by saying that you take one step back and we'll take a step backwards. So what they have done is that they have won one step." Said Tsundue.
Tsundue also said that China's larger power grab vision kept Beijing at the centre of the globe and others being its inferiors.
It is pertinent to mention here that China has been at loggerheads with a number of countries ranging from South East Asia to Japan to Australia to the United States of America. While it has been attempting to expand its sovereignty in some parts, it has been fighting others to gain trade monopoly.
He, however, said that China had not succeeded against any country.
"While India is a united and consolidated power, China has still not been able to consolidate as one state. It has put over a million in concentration camps in East Turkestan (Xinjiang province). They have been struggling for authority in Tibet where Tibetans are fighting for independence. They are struggling with Mongolia; they are struggling with Hong Kong. China has been threatening to invade Taiwan, which has emerged as an economic, military power. But China has not been able to do it." said Tsundue.
"India's attitude has been very positive. India decided to expand its network after independence and rejoiced in its newfound freedom. China doesn't look at its past experiences like that. China is bitter. China believes that after living under various empires for five hundred years. It is our time to rule the world.
China's ambition is not just to create troubles at Indian border or troubling Japan or try to boss around in the South China Sea. China's ambition is to rule the world. You may feel that being a Tibetan I am exaggerating but just look at the history." added Tsundue.
Recently, China had unilaterally tried to change the status quo along the Line of Actual Control. It had erected its camps in the Galwan valley despite its commitment with India of vacating the region. (ANI)