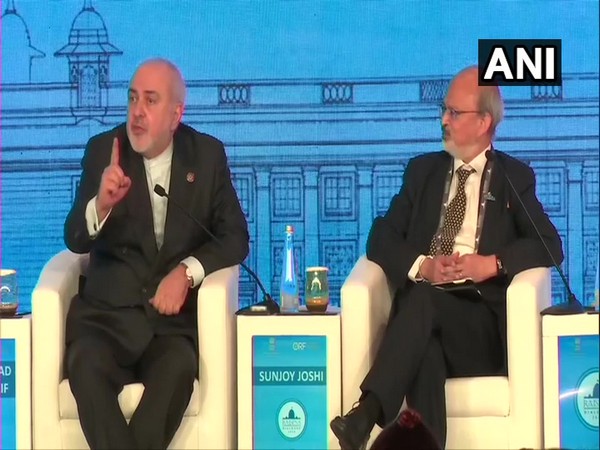 New Delhi [India], Jan 15 (ANI): Iran on Wednesday said that US President Donald Trump, Secretary of State Michael Pompeo and the Islamic State (ISIS) are "celebrating" the death of Iranian general Qassem Soleimani, who was killed in a Pentagon-ordered strike in Iraq earlier this month, and asserted that Washington's "ignorance" and "arrogance" was fuelling mayhem in the region.
"The US looks at things from their perspective, not from the perspective of this region. The killing of Qassem Soleimani shows ignorance and arrogance. 430 Indian cities saw protests against killing of Soleimani," he said at the Raisina Dialogue 2020 here.
Zarif said that Soleimani was the "single most effective force" against the ISIS and hence, the US is celebrating as they "did not like" Soleimani.
"The US did not like General Soleimani. Although, he was the single most effective force against Daesh. If you do not believe me see they are celebrating. Who are celebrating the death of Soleimani, not the ordinary people, but Trump, Pompeo and Daesh," the Iranian foreign minister said while referring to ISIS's Arabic name.
Talking about Iran's airstrikes at two military bases in Iraq, Zarif maintained that Tehran retailiated in "self-defence" and rebuffed Washington's claims that Soleimani was planning to attack US embassies.
"Iran responded in self-defence. US accused Soleimani of threatening to attack US embassies. But now we know there was no such threat...US wants to get rid of international law and that is why it talks of international rules based system," he said.
Zarif said that 10 million people turned out on streets of not only Tehran but various cities in Iran, Iraq, India and Russia, to "commemorate" Soleimani. "So, the US needs to think again about our region. They are making a mistake," he added.
The Iranian foreign minister called for creating hope in the region.
"We need hope in the region to end the despair that is making an entire generation in the region lose hope as they face an uncertain future. We need to create hope in the region," Zarif further said. (ANI)