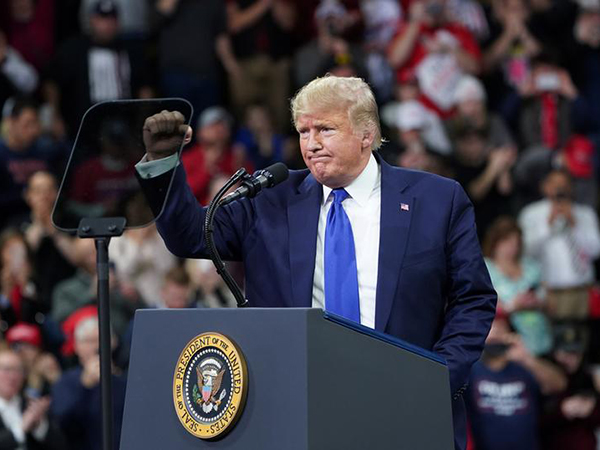 Washington DC (USA) Jan 15: President Trump's legal team is gearing up for an impeachment trial that is poised to start next week, promising fireworks at a time Trump and top aides are expected to be out of the country attending the World Economic Forum in Davos, Switzerland.
White House counsel Pat Cipollone and his team of lawyers in the counsel's office, along with the president's personal attorney Jay Sekulow, have been preparing for weeks, including through meetings with Senate leaders on Capitol Hill.
"We've been prepared to proceed as early as mid-December," Sekulow told The Hill.
The White House is keeping quiet about the details of its legal strategy, including whether Trump's Republican allies in the House will take a role in his defense. That will likely need to be decided by the end of the week.
Cipollone is expected to take a leading role, with Sekulow playing a key but supporting role. Cipollone will also be assisted by his deputies in the White House counsel's office, Patrick Philbin and Michael Purpura.
The White House has mulled adding Alan Dershowitz to the mix, though Dershowitz, a contributor to The Hill, said Monday that he had nothing to report when asked about the possibility.
The House is slated to vote Wednesday on sending articles of impeachment to the Senate after Speaker Nancy Pelosi (D-Calif.) held them to seek leverage on the rules for the trial.
The House voted in December to impeach Trump in an almost completely party-line vote on charges he abused his office by pressuring Ukraine's president to investigate former Vice President Joe Biden, a leading Democratic presidential candidate, and a debunked theory about the 2016 Democratic National Committee hack and that he obstructed the congressional inquiry.
Trump has insisted he did not pressure Ukraine nor did anything improper and accused Democrats of conducting a partisan "witch hunt" meant to damage him ahead of the 2020 election.
The Senate trial's outcome is not in doubt given the GOP's majority, though there is some uncertainty on whether witnesses such as former national security adviser John Bolton will be called. A few GOP senators have signaled an interest in hearing from witnesses. Witnesses would need to be approved by a majority vote in the Senate.
"I am confident that the president's ability to defend his case the way he wants it to be defended will be protected in the process," White House Legislative Affairs Director Eric Ueland told reporters on Monday.
Trump has also floated calling witnesses like Pelosi and House Intelligence Committee Chairman Adam Schiff (D-Calif.), as well as Joe and Hunter Biden.
Senate Majority Leader Mitch McConnell (R-Ky.) indicated again Tuesday that he wants to avoid calling additional witnesses.
White House allies say it would be a grave political miscalculation for Republican senators to vote to call witnesses sought by Democrats while rejecting appeals for witnesses sought by Trump because it would send a signal of GOP disunity after not a single House Republican voted in favor of impeachment and a handful of Democrats defected.
"If that starts weakening, that could really muck up the messaging. The second we have a circular firing squad, Nancy Pelosi and Chuck Schumer are winning," said one former White House official.
One Trump ally said Tuesday it appeared unlikely that any House members would be added to the defense team.
Proponents of their involvement argue those lawmakers are intimately familiar with the evidence Democratic managers will present at the trial and possess the charisma to create made-for-TV moments that could bolster the president's defense.
Reps. Jim Jordan (Ohio), John Ratcliffe (Texas) and Doug Collins (Ga.) are among the Republicans who have been mentioned for Trump's team.
"Everything will be televised, it will be five or six hours a day, which considerable time of that will be Democratic House impeachment managers attacking President Trump," said Jason Miller, a former Trump campaign adviser who co-hosts a radio show devoted to defending the president on impeachment.
"There has to be the right mix of specific legal thought and presentation, but there also needs to be strong debaters as part of the president's defense team," Miller added. "Ultimately President Trump should have who he feels are his strongest defenders."
Critics, including a number of Senate Republicans, warn this could create a circus-like atmosphere and detract from the president's case.
Tony Sayegh, a former spokesman for Treasury Secretary Steven Mnuchin, and Pam Bondi, the former Florida attorney general, were brought on to assist the White House communications team on impeachment strategy and messaging and have met regularly with congressional staffers. They've also been in close consultation with the White House legal team, in addition to appearing on television to defend the president.
Ultimately, Trump is likely to serve as his own chief spokesman - far from the Senate floor.
The president has grown accustomed to lashing out over impeachment since the Democratic-led House opened an inquiry into his dealings with Ukraine. At times, he's fired off tweets that have seemed to conflict with one another or cut against messages from the White House or his allies on Capitol Hill.
Over the weekend, Trump repeated his assertion that Pelosi and Schiff should be called to testify, apparently advocating for a lengthy trial before in the next breath suggesting the Senate dismiss the case altogether. The latter notion was quickly brushed off by Republican senators.
"I don't really think it's that much of a problem. It's really just baked in," said the former White House official of the president's tweets. "He's going to support whatever he thinks is best for him at that moment."
The only way Trump's public comments could have any impact on the proceedings, the person asserted, is if the president begins complaining that Republican senators are not treating him fairly in the trial.
"That is the only way in which I think there could be problems for Republicans, and those problems would be of Republican senators' own making," the former official said.
Source: The Hill