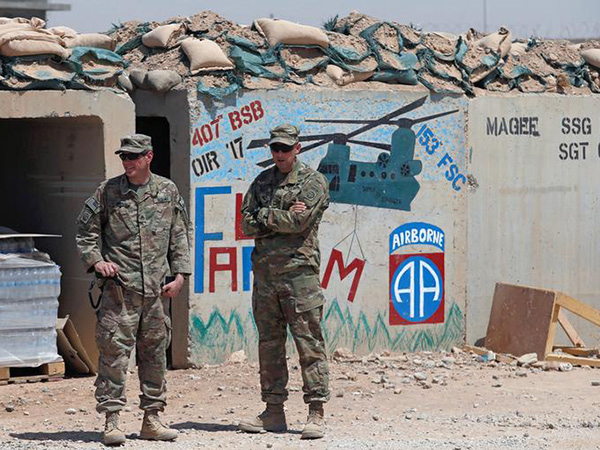 Washington DC (USA) Jan 15: The US government is preparing to cut USD 250 million in military aid to Iraq if American troops are expelled from the country, media reported.
The State Department's Bureau of Near Eastern Affairs is working to cut the entire quarter-billion dollars of military financing for Iraq for the current fiscal year, the Wall Street Journal said on Tuesday, citing emails from the State and Defence Departments.
American officials have repeatedly ruled out a complete pullback from Iraq. White House National Security Adviser Robert O'Brien last week said the United States would leave on its "own terms."
US, Iraq and S-400
The WSJ report follows an earlier statement by Principal Deputy Assistant Secretary of State Joey Hood that Iraq could face US sanctions if the former purchased S-400 air-defence systems from Russia.
Replying to a question during an event at the Middle East Institute in Washington DC, Hood said on Tuesday that a deal to buy the Russian missile systems would likely trigger sanctions and noted that the United States was advising its partners to refrain from the move.
Citing Iraqi parliament members, the Wall Street Journal reported earlier that the country had started consultations with Russia on the possible purchase of S-400 air defense systems.
On 5 January, the Iraqi parliament voted to expel coalition forces over a 3 January US drone attack near Baghdad International airport that assassinated Iranian commander Qasem Soleimani, along with Abu Mahdi Muhandis, a senior member of Iraq's Iranian-backed Shia Popular Mobilization Forces.
"The Iraqi government must work to end the presence of any foreign troops on Iraqi soil and prohibit them from using its land, airspace or water for any reason," the parliament's resolution read.
The US State Department, in turn, stated that any new American delegation sent to Iraq would discuss matters of returning to a strategic partnership rather than troop withdrawal with the country's government.
Following the non-binding vote in the Iraqi parliament, the Trump administration has expressed its keen disappointment over the decision.
"We have a very extraordinarily expensive airbase that's there. It cost billions of dollars to build. Long before my time. We're not leaving unless they pay us back for it [...] We will charge them sanctions like they've never seen before ever. It'll make Iranian sanctions look somewhat tame," Trump said.
Source: Sputnik