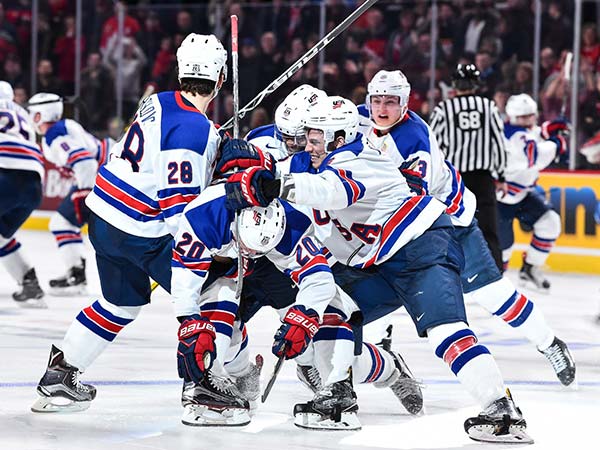 Washington (USA) Jan 5: The United States faced a tough task in the semifinals of the World Junior Championship on Friday but skated away with a 2-1 victory over an unbeaten Russia team to advance to the gold medal game.
Oliver Wahlstrom and Sasha Chmelevski each potted a goal and Cayden Primeau made 35 saves to lead the Americans to the win.
Primeau, who was named the U.S. player of the game, didn't make the save of the game, however. With Russia down a goal and on a power play in the third period, Klim Kostin's shot squirted past the netminder, and Ivan Muranov was ready to pounce on the loose puck. USA defenseman and Oilers prospect Phil Kemp, who has been a calming factor on the blue line all tournament long, lifted Muranov's stick and swept the puck away in one fell swoop to keep the puck from crossing the goal line.
Russia had cut the Americans' lead to a goal in the second period when Panthers prospect Grigori Denisenko ripped a shot from a bad angle that sneaked past Primeau on the short side and under the crossbar. Primeau had the fifth-best goals-against average and save percentage in the tournament entering the contest; on Friday, the Canadiens prospect outdueled Pyotr Kochetkov (undrafted), who had a .965 save percentage in three previous starts, including a 30-save showing in a loss to Canada in the prelims.
Russia thought it had taken a 1-0 lead in the first period when a wide-open Nikita Shaskov appeared to score on a power play. Upon review, it was determined the puck went in off Shaskov's turned skate via a slight kicking motion and the goal was waved off. The reversal seemed to amplify the Americans, who took a 1-0 lead later in the period when Islanders draft picks Logan Cockerill and Wahlstrom connected for a goal.Jack Hughes, who returned from a three-game absence to key a victory over the Czech Republic in the quarterfinals, set up Chmelevski's eventual game-winner, a power-play goal in the second period. Hughes, the top prospect at the WJC and the projected No. 1 overall pick in next summer's NHL Draft, obtained the puck in the right circle and fed Chmelevski as the Sharks prospect crashed the net.
Team USA is guaranteed a medal for a fourth straight year - the nation's longest streak at the World Juniors. The last time the Americans won gold - in 2017 - they defeated Russia 4-3 in the semifinals on Canadian soil. This year, the U.S., playing in Vancouver, will face the winner of Friday's other semifinal, Switzerland-Finland, in the gold medal game at 8 p.m. ET Saturday. The Russians will play for bronze at 4 p.m.
Source: Sporting news