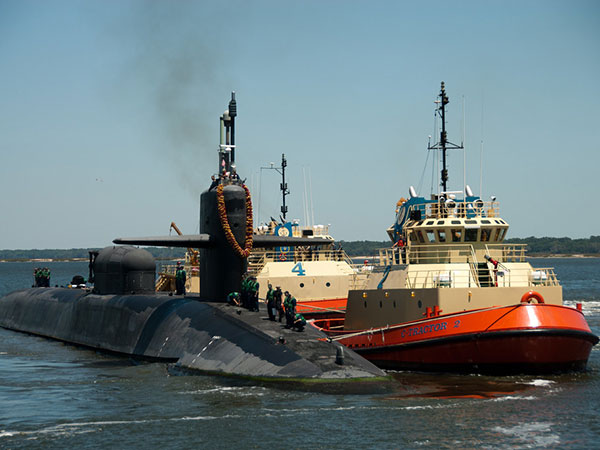 Ottawa (Canada) Dec 08: Joshua Watson had just graduated from the U.S. Naval Academy and looked forward to a military career as a pilot. On Saturday, he was being hailed a hero, as his family recounted how the 23-year-old - in his last minutes of life - led first responders to an active shooter at the Pensacola, Fla., naval base.
In a Facebook post, his brother Adam said Watson saved countless lives with his own.
"After being shot multiple times he made it outside and told the first response team where the shooter was and those details were invaluable," Adam Watson wrote on Facebook.
"He died a hero," he wrote.
The anguish spread from Pensacola and into communities across the country, as fellow Americans shared in the shock and grief of Friday's shooting that left four people dead, including the shooter, and eight others injured.
The Navy identified the other two victims as Airman Mohammed "Mo" Haitham, 19, of St. Petersburg, Fla., and Airman Apprentice Cameron Scott Walters, 21, of Richmond Hill, Ga..
The Navy praised all three flight school students for their "exceptional heroism and bravery in the face of evil."
"When confronted, they didn't run from danger; they ran towards it and saved lives," Capt. Tim Kinsella, the commanding officer of NAS Pensacola, said in a statement Saturday.
Haitham's mother, Evelyn Brady, told the Tampa Bay Times that her son joined the U.S. Navy after graduating from high school last year. The former track and field star had been assigned to flight crew training and was looking forward to graduating from the program later this month, she said.
"He said he was going to get his flight jacket for Christmas," she said. "Now that's not going to happen."
'He died serving his country'
News of the attack also hit hard in Enterprise, Ala., where Watson's family was preparing Saturday morning to drive 209 kilometres to the military base in Florida's Panhandle.
"I'm just an emotional wreck," his father, Benjamin, told The Associated Press.
"We want my son's story told," he said.
In an account he shared earlier with the Pensacola News Journal, his son was shot at least five times. Though wounded, the young officer flagged down first responders and described the shooter.
"He died serving his country," the elder Watson said of his son.
Benjamin Watson told the News Journal that his son had reported to Pensacola two weeks ago for flight training to live out his dream of becoming a Navy pilot.
Adam Watson wrote nostalgically of his brother, who also went by his middle name Kaleb.
"When we were little I gave Kaleb the name little poot and it stuck. It eventually evolved into pootis and finally uncle poot," he wrote on Facebook. "Just wish I could talk to him one more time or wrestle with him one more time even though he could probably take me now."
Motive not yet known
Officials investigating the deadly attack were working Saturday to determine whether it was motivated by terrorism, while President Donald Trump indicated he would review policies governing foreign military training in the United States.
The FBI identified the shooter in a statement Saturday night as Mohammed Alshamrani, 21. Investigators said he was a 2nd Lt. in the Royal Saudi Air Force and was a student naval flight officer of Naval Aviation Schools Command. A U.S. official on Friday said the FBI was examining social media posts and investigating whether he acted alone or was connected to any broader group. The official wasn't authorized to discuss the matter publicly and spoke to the AP on condition of anonymity.
Two U.S. officials said Friday that authorities were investigating whether the attack was terrorism-related. They spoke on condition of anonymity to disclose information that had not yet been made public.
In remarks at a gathering of top U.S. defence and military officials on Saturday, Defence Secretary Mark Esper was asked whether he could say definitively that the shooting was an act of terrorism.
"No, I can't say it's terrorism at this time," he said, adding that the investigation needs to proceed. He declined to discuss details of the investigation so far.
President Trump also declined to say whether the shooting was terrorism-related. The president tweeted his condolences to the families of the victims on Friday and noted that Saudi King Salman had reassured him in a telephone call that the shooter "in no way shape or form represents the feelings of the Saudi people."
But in comments echoing those made earlier by Esper, Trump said Saturday that he would review policies governing foreign military training in the U.S.
The U.S. has long had a robust training program for Saudis, providing assistance in the U.S. and in the kingdom. Currently, more than 850 Saudis are in the United States for various training activities. They are among more than 5,000 foreign students from 153 countries in the U.S. going through military training.
"This has been done for many decades," Trump said. "I guess we're going to have to look into the whole procedure. We'll start that immediately."
Speaking at the Ronald Reagan National Defence Forum in Simi Valley, Calif., on Saturday, Esper and others downplayed any initial impact on U.S.-Saudi ties.
Asked whether he would now hesitate to send U.S. forces to Saudi Arabia, he said, "No, not at all." He said the U.S. and Saudi Arabia have shared security interests, especially with regard to Iran.
The shooting has shined a light on the sometimes rocky relationship between the two countries, however.
The kingdom is still trying to recover from the killing last year of Washington Post columnist Jamal Khashoggi at the Saudi Consulate in Istanbul. Saudi intelligence officials and a forensic doctor killed and dismembered Khashoggi on Oct. 2, 2018, just as his fiancee waited outside the diplomatic mission.
Source: CBC News