What is happening with Elizabeth Warren? 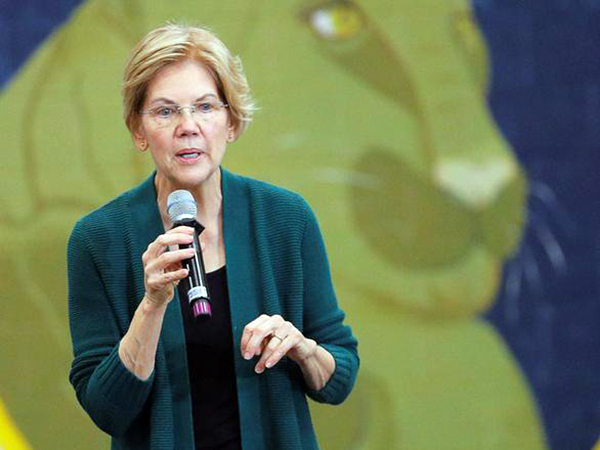 Washington DC (USA) Dec 03: Less than two months ago, it looked as though Elizabeth Warren might just run away with the 2020 Democratic presidential nomination.
The Massachusetts senator had surged in Iowa and New Hampshire -- the two states that will lead off the nomination fight earlier next year -- and had pulled into a dead heat with former Vice President Joe Biden nationally.
Then that Warren wave hit a wall. Starting right around mid-October, Warren's numbers not only stopped moving upward but also began trending down. A Quinnipiac University national poll released just days before Thanksgiving showed Warren at 14% in the national ballot question -- down from 28% in the same poll in October. In a Des Moines Register/CNN survey released in November, Warren dipped to 16% -- down six points from a September poll when she led the pack.
Warren's slide is impossible to debate. What's more up for argument is the "why" behind it.
You can argue -- as Warren allies do -- that she was riding an artificial high over the summer and into the early fall. That she was never going to put the nomination away this early -- especially with such a giant field and the presence of an establishment favorite like Biden. And that while she isn't at the top of the pack right now, she's still in the top four and well-positioned to make a strong run at the nomination. (That last part, no matter how you explain Warren's recent struggles, remains, without question, true.)
Here's another theory: Warren's support for "Medicare for All" and her opponents' efforts to highlight and question that support sit at at the center of her current problems.
The beginning of Warren's polling dip coincides closely with the October 15 presidential debate. In that debate, Warren was attacked from all sides -- especially by Biden and South Bend Mayor Pete Buttigieg -- for a) her support for a plan that would totally eliminate private health insurance and b) her lack of specifics on how she would pay for it.
It was Warren's worst debate of the race to date -- and even when she released a detailed funding plan for Medicare for All, it was met with a lukewarm reception. Warren followed all that up with a lackluster showing in the November 20 debate.
Add it all up and there's plenty of reason to believe that Warren's full-fledged support for Medicare for All -- coupled with her less-than-successful attempts to defend that position in the last two debates -- led to her current reduced status in the race.
The question now is whether Warren adjusts or deemphasizes her support for Medicare for All in hopes of winning back some of the support she's lost over the past six to eight weeks. Given how far forward she has leaned on the health care proposal, however, it's hard to see how she could pull that off.
Source: CNN News