What you need to know for the Grey Cup 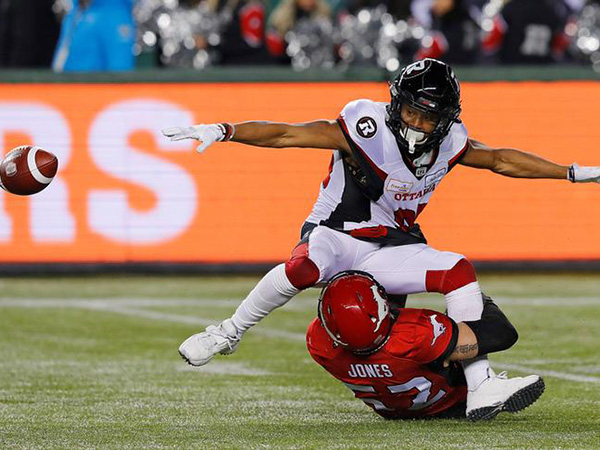 Ottawa (Canada) Nov 23: The 107th Grey Cup game kicks off Sunday at 6 p.m. ET in Calgary. Whether you've been following the CFL all year or just need to cram in time for your Grey Cup party, here are some things you should know to better enjoy the big game:
The Hamilton Tiger-Cats are favoured to beat the Winnipeg Blue Bombers. Most oddsmakers have set the betting line at 3.5 points. That means if you wager on Hamilton, they have to win by four for you to cash in. If you bet on Winnipeg, they can win the game outright or even lose by up to three points. Last year, Calgary covered the spread as a four-point favourite. But the underdog covered four years in a row before that, and two of them pulled off the upset outright.
One of the two longest current Grey Cup droughts is guaranteed to end. Hamilton hasn't won it in 20 years. Winnipeg hasn't won it in 29. And remember the CFL is only a nine-team league (eight until Ottawa got an expansion team in 2014). We all like to make fun of the Leafs for going 52 years without a Stanley Cup, but at least they're competing with 30 other teams.
Hamilton's 2019 backstory: The Ticats are a juggernaut. They had the best regular-season record in the league (15-3), they scored the most points and they gave up the fewest. The average score in those games was 31-19, and they won last week's East Division final over Edmonton 36-16. The only caveat is that they did most of their damage in the CFL's weaker division, where every other team gave up more points this year than it scored. Hamilton did, however, beat Winnipeg both times they met: 23-15 in Hamilton in late July and 33-13 in Winnipeg in late September. There just aren't many holes in the Ticats' resume.
Winnipeg's 2019 backstory: The Bombers looked like they might be the CFL's best team when they started 5-0 (it was Hamilton that ended the winning streak). But a season-ending shoulder injury to quarterback Matt Nichols in mid-August seemed to kill their Grey Cup hopes. Winnipeg limped to an 11-7 finish with Chris Streveler and then Zach Collaros filling in at QB and went into the playoffs as an underdog. But the Bombers upset the two best teams in the West - Saskatchewan and Calgary - to reach the Grey Cup for the first time since 2011.
Tiger-Cats player to watch: Brandon Banks. The CFL's Most Outstanding Player award winner might also be the league's most exciting player. He's a little guy (listed at 5-foot-7 and 150 pounds, so probably even smaller than that) who makes a big impact in multiple facets of the game. Banks led all receivers this year in catches (112), yards (1,550) and touchdowns (13). He's also a dangerous return man who brought back two missed field goals for touchdowns - including a 115-yard runback.
When Winnipeg is kicking the ball is not the time to get a snack. That's because Hamilton has two guys capable of taking one to the house at any time. Good as Banks is, he's not even Hamilton's go-to returner. That's Frankie Williams, who won the CFL's special-teams player of the year award after leading the league in punt-return yardage and finishing near the top on kickoffs. He brought back two kicks for touchdowns.
Blue Bombers/Canadian player to watch: Andrew Harris. The Winnipeg-born running back won the CFL rushing title for the third year in a row, and it wasn't close: Harris' 1,380 yards put him almost 300 clear of the field. And he did that despite missing two games because of a failed steroid test. Opponents have held Harris in check in these playoffs, though. Calgary limited him to 67 yards on 16 touches (rushing and receiving), and he had only 49 yards on 12 touches last week vs. Saskatchewan.
Neither starting quarterback had the job at the start of the year. Hamilton's Dane Evans took over after Jeremiah Masoli suffered a season-ending injury in Week 7. He went to complete 72.2 per cent of his passes (better than anyone with at least 175 attempts) and threw for a solid 21 touchdowns with 13 interceptions. Evans lit up Edmonton in the East final for 386 yards and a TD. Meanwhile, Collaros has only been with Winnipeg since Oct. 9. The Bombers tried going with Streveler after Nichols went down, but he's more of a runner (as shown by his horrible 8/14 TD/INT ratio). Collaros is no star, but he's a good enough passer to give Winnipeg a shot and he hasn't thrown an interception yet in the playoffs.
The Bombers have the weirdest fan. Back in 2001, a guy from Winnipeg named Chris Matthew promised to wear shorts until his team won the Grey Cup. The game was only a week away and the Bombers had the best team that year, so he figured it wouldn't last long. But here we are 18 years later and he's only put on pants for a few funerals. He has a kilt for formal occasions, but he swears he keeps the shorts on even when shovelling snow in those brutal Winnipeg winters. Read more about this strange - and yet definitely principled - man here.
The halftime act is country music star Keith Urban. He's the Australian guy with the good hair. I'll admit I don't know any of his songs, but from what I've gathered from a couple of internet lists, two of his best are You'll Think of Me and Blue Ain't Your Colour. I await your angry comments if I'm wrong.
Source: CBC News